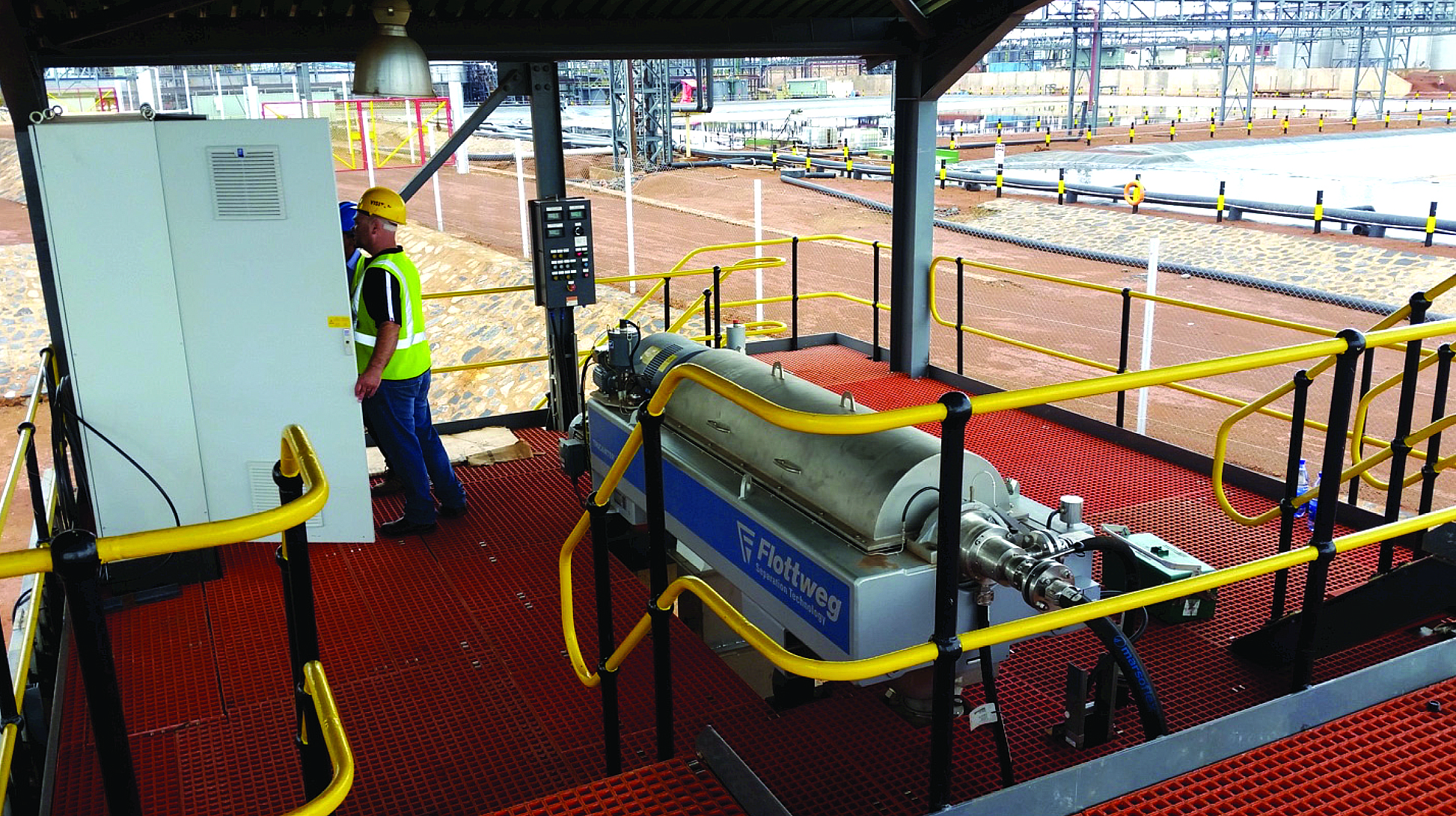 Flottweg says its Tricanters are easy to operate and maintain due to their application-optimized, compact design.

When mining copper, there are several possible methods for extracting the metal from the ore. A traditional choice is through solvent extraction (SX). Other metals — platinum, gold, cobalt, nickel, zinc or uranium — also are commonly recovered by SX followed by electrowinning (EW), which involves electro-deposition of metals in solution after leaching. Electro-refining uses a similar process to remove impurities from metals.

Most commercial SX plants suffer from the formation of crud — a solid-
stabilized emulsion that commonly accumulates at the aqueous/organic interface in the settlers of solvent-extraction stages. It is caused by a variety of substances entering the SX circuit, such as wind-blown dust, entrained solids from leaching, impurities in plant solutions, and even insects attracted by the lights in the SX plant. While a thin layer of
crud at the aqueous/organic interface can aid coalescence of fine droplets,
excess crud can interfere with phase separation and severely reduce the efficiency of the settlers.

If allowed to build up in the settlers, crud can begin to move to the next mixing stage. This can rapidly cause a “crud run,” resulting in severely increased entrainment. This in turn causes the contamination of electrolytes with the leach solution and organic phase.

The entrainment of electrolyte into the extraction section of solvent extraction can result in loss of copper to the raffinate (in this case when refining copper). Entrainment of organic in the raffinate will result in increased organic losses. Crud typically has an organic content in excess of 50%. Losses of organic with the crud can cost plants from hundreds of thousands to millions of dollars per year.

Traditional methods used to capture crud in the pregnant liquor produced by leaching also remove the liquor captured in the crud and are tedious and labor-intensive. The industry has a more effective approach: Tricanter technology.

Operators vacuum the crud layer off and store it in a tank, from where it is pumped into a Flottweg Tricanter that separates crud into four phases:

The fourth phase builds up at the organic aqueous interface. By adjusting the variable impeller of the Tricanter correctly, the operator can ensure that this portion of ultra-fine solids is discharged as part of the aqueous phase. The dewatered solids are removed for disposal. The organic phase can be used again in the SX process, and the aqueous phase flows to the neutralization tank.

• Avoiding loss of organic solution that will
occur without the separation process.

• Maintaining control of the pH value.

• Maximum solvent recovery, reducing
solvent loss by up to 60%.

The design and function of the three-phase centrifuge is similar to that of a decanter (two-phase separation). Solids settle on the inner wall of the bowl when subjected to centrifugal force. The scroll constitutes the conveying tool.

The decisive difference in the decanter lies in separate expulsion of the two liquid phases. With the Tricanter, heavy liquid is discharged under pressure via an adjustable impeller. The light liquid flows off without pressure. The impeller allows infinite adjustment of the pond depth during operation and results in fast, precise adaptation to changing feed conditions without interrupting operation.

The Tricanter guarantees a high level of economic efficiency because the continuous three-phase separation eliminates the need for further processing steps and separation stages. The separation process can be adapted on the fly to changing conditions.

Zambia and the Democratic Republic of the Congo alone account for 1.2 million metric tons per year (mt/y) of SX/EW copper production, of which at least 80% is produced in plants using Flottweg Tricanters for crud treatment. At a savings of $12 per mt Cu, that amounts to an annual savings of more than $12 million provided by Flottweg Tricanters on just this one application in these two countries.

The Tricanter normally becomes a
viable option for copper SX/EW refineries producing 20 kt/y of copper or more. With the savings it generates in organic recovery, a Tricanter pays for itself in about four months. Its reliability is also a major advantage as most of these
machines are installed in remote regions. Tricanters that were installed in Zambia 16 years ago are still operating without problem.

Chinese companies were slow to adopt centrifuge technology, relying instead on chamber filters for the copper crud process. In 2015, one mining company was frustrated because their chamber filter press could not meet expectations.

They commissioned a Tricanter for a copper crud application in Myanmar. Because it was the first application the FW China team was exposed to, a quick learning curve was addressed and overcome. Challenges were found around few settled fine solids, and higher-than-expected wear caused by excessive bowl speed.

By adjusting the separation disc design and updating the scroll with heavier wear protection using tile protection, the challenges were solved. The company now saves more than 60% solvent after switching to the Flottweg Tricanter versus a chamber filter.