STM developed the Vertical Regrind Mill (VRM) and released it to the minerals market in 2012. More than 60 of the stirred media grinding mills have been sold to mines in the Americas, Europe, Africa, Asia and Australia. For fine and ultra-fine grinding applications, STM markets the technology under the name HIGmill through its exclusive partner, Metso Outotec. For coarse regrind applications, STM offers the VRM mill directly to customers in the minerals market.

STM also developed a new stirred mill for coarse grinding applications up to 6-mm feed size. The Vertical Power Mill (VPM) line ranges in size from 700 to 12,500 kW with high flow rates and potential energy savings of up to 40%. Due to its small footprint, STM is promoting the VPM as a viable ball mill replacement in HPGR circuits or for capacity increases in existing plants.

The energy savings are achieved through uniquely designed rotors and stator rings in a vertical arrangement that enable high power intensities, even with relatively low tip speeds. This results in higher energy efficiency, a smaller footprint and the potential for increased recoveries. Power intensities of 200-300 kW/m3 are typical, according to the company, and operational tip speeds range between 6-12 m/s, depending on application and mill size.

A 2020 CEEC paper titled Reducing Energy and Water Consumption Through Alternative Comminution Circuits explained that “reductions in the order of 35% of energy consumption relative to Bond” have been demonstrated by different stirred mill technologies, with actual savings varying “depending on feed size to the stirred mill.”

The technology will be installed at the Iron Bridge Magnetite project in Western Australia. The joint venture between Fortescue Metals Group and Formosa Steel will be the first large-scale plant without horizontal milling. Its flowsheet includes a two-stage HPGR circuit feeding a total of 10 HIGmills.

Costs have always been a major focus point for this project. When its approval was announced in April 2019, Fortescue CEO Elizabeth Gaines said, “The innovative design, including the use of a dry crushing and grinding circuit, will deliver an industry-leading energy efficient operation with globally competitive capital intensity and operating costs. In developing the Iron Bridge Project, Fortescue has demonstrated and refined each step of the ore processing system and conducted full-scale trials. Our focus has been to create the most energy and cost-efficient ore processing facility, tailored to the specific ore we will mine.”

A project presentation accompanying the approval announcement noted that as part of the project’s rigorous process validation program, a half-billion dollars had been invested at an early stage to reduce process technical risk, 1 million metric tons of ore had been processed through full-scale HPGR and air classifier circuits, ore had been processed through a large-scale pilot plant replicating full flowsheet, and equipment performance had been optimized during the pilot plant program. 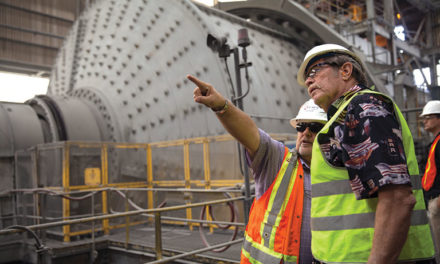