The companies said the final stage of the test was completed from May to September 2021 with four mining cavities successfully excavated to produce approximately 1,500 metric tons of high-value ore ranging in grade from 4% U3O8 to 11% U3O8. The program was concluded with no safety, environmental or radiological incidents and confirmed the ability to achieve key operating objectives associated with the test program, including targets for cavity diameter, rates of recovery, and mine production rates, according to the company.

The majority of the ore recovered from the test mining program has now been transferred to the McClean Lake mill and is expected to be processed for the MLJV by the end of the year.

“The SABRE mining method is the result of long-term R&D and involves a mix of different equipment, technology and expertise,” Orano Canada President and CEO Jim Corman said.

Denison Presdient and CEO David Cates commented, “With this test result, SABRE has demonstrated that it is capable of mining high-grade uranium ore in the Athabasca Basin region.”

SABRE is the culmination of a mining equipment invention and development initiative that began in 2004. It is a non-entry, surface-based mining method that uses a high-pressure water jet placed at the bottom of a drill hole to excavate a mining cavity. The cuttings from the excavation process are then air lifted to surface, separated and stockpiled. SABRE is viewed as an innovative mining method that could potentially allow for the economic access to relatively small high-grade orebodies in the Athabasca Basin that are either too small or too deep to be mined economically by open-pit and/or underground mining methods.

SABRE, said the two project partners, is unique in that the mining method can be selective and scalable, which has the potential to provide superior flexibility when compared to conventional mining methods and is ideally suited to ever-changing uranium market conditions, with a potentially short
production ramp up of months instead of years.

It is less intrusive and has a potentially smaller surface footprint when compared to conventional open pit or underground mining methods. Reduced water usage and power consumption also contribute to potential reductions in greenhouse gas emissions and improved sustainability. Additionally, as a non-entry mining method, radiological exposure for mine workers is minimized. 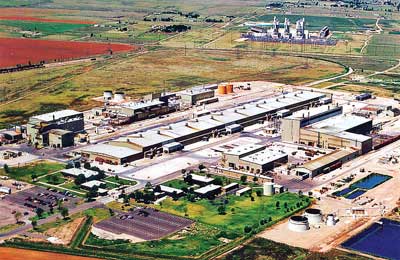