Prospects for increased production of metals from conventional rare-earth element (RRE) deposits in the United States suffered a setback last year when Colorado-based Molycorp filed for Chapter 11 bankruptcy after changes in China’s RRE trade policies pulled the rug out from under the company’s optimistic effort to elevate its Mountain Pass, California, rare-earth mine to world-class producer status. After racking up more than $1.7 billion in debt, Molycorp shuttered the money-losing mine and processing operation, and although the company won court approval to exit bankruptcy earlier this year, the future of Mountain Pass is unclear—particularly after Molycorp recently referred to the high “scrap value” of the mine in response to public concern that the terms of the court’s bankruptcy release might free the company from responsibility for certain site-remediation costs and liabilities.

Europium, a rare-earth element that has the same relative hardness of lead, is used to create fluorescent light bulbs. With no proven substitutes, europium is considered critical to the clean energy economy.

However, earlier this year, a major U.S. university reported that one of its research projects had produced results that might enable the U.S. to reduce its dependence on imported REEs. A team of Pennsylvania State University and the U.S. Department of Energy researchers reportedly found a cost-effective and environmentally friendly technique to extract these metals from coal byproducts.

REEs are a set of 17 metals—including europium, scandium, yttrium, lanthanum and cerium—crucial for production of high-tech equipment used in health care, transportation, electronics and numerous other industries. They support more than $329 billion of economic output in North America, according to the American Chemistry Council, and the United States Geological Survey (USGS) expects worldwide demand for REEs to grow more than 5% annually through 2020. China produces more than 85% of the world’s REEs, while the U.S. is a distant second, at a little more than 6%, according to the USGS.

“We have known for many decades that rare-earth elements are found in coal seams and near other mineral veins,” said Sarma Pisupati, professor of energy and mineral engineering at Penn State. “However, it was costly to extract the materials and there was relatively low demand until recently. We wanted to take a fresh look at the feasibility of extracting REEs from coal because it is so abundant in the U.S.”

Using byproducts of coal production from the Northern Appalachian region of the U.S., the team investigated whether an ion exchange process could be used to extract REEs in a safer manner than other extraction methods such as roasting, which is energy intensive and involves use of concentrated acids. In contrast, ion exchange is considered more environmentally friendly and requires less energy.

“Essentially, REEs are sticking to the surface of molecules found in coal, and we use a special solution to pluck them out,” said Pisupati. “We experimented with many solvents to find one that is both inexpensive and environmentally friendly.”

The team reported in their findings, published in a recent issue of Metallurgical and Materials Transactions, that ammonium sulphate was both environmentally friendly and able to extract the highest amount of REEs.

The researchers used coal byproducts in their study, some of which were discarded or marked as refuse during mining operations due to poor quality.

In their study, the team also identified the locations within the coal seam that contained the highest amounts of REEs. Often the highest concentration is found in the poorest quality coal, said Pisupati.

“You find some REEs in the coal itself, but the highest concentration is in the coal shale, or the top layer of a coal seam. Knowing this, we can further target our operations to be more efficient,” he said.

The team is now collaborating with several Pennsylvania coal-mining companies to explore the viability of a commercial REE-extraction operation.

This article, written by Liam Jackson, originally appeared in Penn State News, an online publication of The Pennsylvania State University. 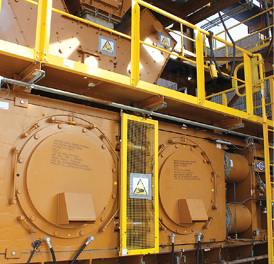