Maelgwyn Mineral Services (MMS), a Wales, U.K.-based mineral-processing technology company, recently highlighted successful applications of its Aachen Shear Reactors — a concept described by the company as an efficient mass transfer device developed and refined over many years of experience with its Imhoflot flotation technology.

In general, typical benefits gained through uses of the reactor in gold plants include enhanced kinetics, reduced cyanide and lime consumption, increases in gold recovery and downstream benefits for carbon plants due to steeper leach profile, said the company. The Aachen units can be manufactured in a range of sizes to suit site-specific flow-rate requirements up to a maximum flow of 800 m3/hour for a single reactor; and enable efficient oxygen dispersion under high shear (velocities of up to 10 m/s within the unit) and pressure (3 to 6 bar) generated by the feed pump. MMS said the shear exposure reduces boundary layer resistances that influence most solid/liquid reaction rates. This can enhance the reaction kinetics and enable process options not feasible otherwise, according to the company.

For the direct cyanidation of gold ores, the Aachen reactors are used in two different ways:

MMS noted that currently there are more than 60 Aachen reactors installed across various operations for a combination of pre-oxidation and Aachen assisted leaching. Aachen reactors were recently installed at Pan African Resources’ Elikhulu tailings retreatment plant, which operates a conventional carbon-in-leach circuit including the proprietary Aachen pre-oxidation process.

MMS further noted that it holds a European patent for its Leachox process for treatment of refractory gold ores, and current installed Leachox capacity accounts for recovery of more than 3 million ounces per year (oz/y) of gold contained in sulphides at operations such as the Kibali mine in the Democratic Republic of the Congo, the Tongon mine in Cote d’lvoire, the TGME mine in South Africa, and the Vasilkovskoye mine in Kazakhstan.

Leachox is a partial sulphide oxidation process for the recovery of gold and silver from sulphide minerals. Depending upon the mineralogy, a number of processes are used, but central to the Leachox process is the Aachen Shear Reactor, which enhances the kinetics and reduces reagent consumption (oxygen, cyanide and lime) that otherwise can be prohibitive. The reactor is designed to introduce a high degree of shear, which removes passivating films that may lead to loss of recovery.

Telson Mining, a Canada-based mining company with two Mexican gold, silver and base metal mining projects, contacted MMS recently to explore possibilities for maximizing returns from its Campo Morado production, which currently produces zinc and lead concentrates with gold, silver and copper as byproducts. MMS had previously conducted preliminary testing of samples from Campo Morado in 2013 for Nystar, the project’s former owner.

According to Telson, tests have indicated that substantial increases in precious metal recoveries are possible at Campo Morado using the Leachox Process.

“The Leachox precious metal recovery testing conducted by Maelgwyn demonstrates that significant increases up to 65% gold and 81% silver are possible at Campo Morado,” stated Antonio Berlanga, Telson’s CEO. “Should additional planned Leachox testing of optimization work to confirm recoveries, ultimate best grind size and reagent additions show a path forward to a commercial installation of this technology, we could improve recoveries from current levels of gold at 15%-20% and silver 30%-40%, which would significantly increase the mine’s profitability by increasing the ounces of gold and silver produced at Campo Morado.”

Managing the Downturn: Now is the Time for Excellence in Operations 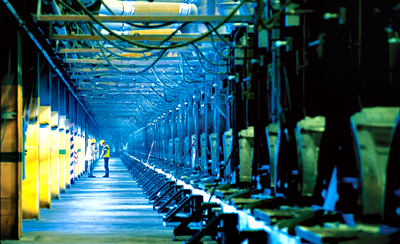 Study Calls for New Forms of Collaboration in Alumina Research