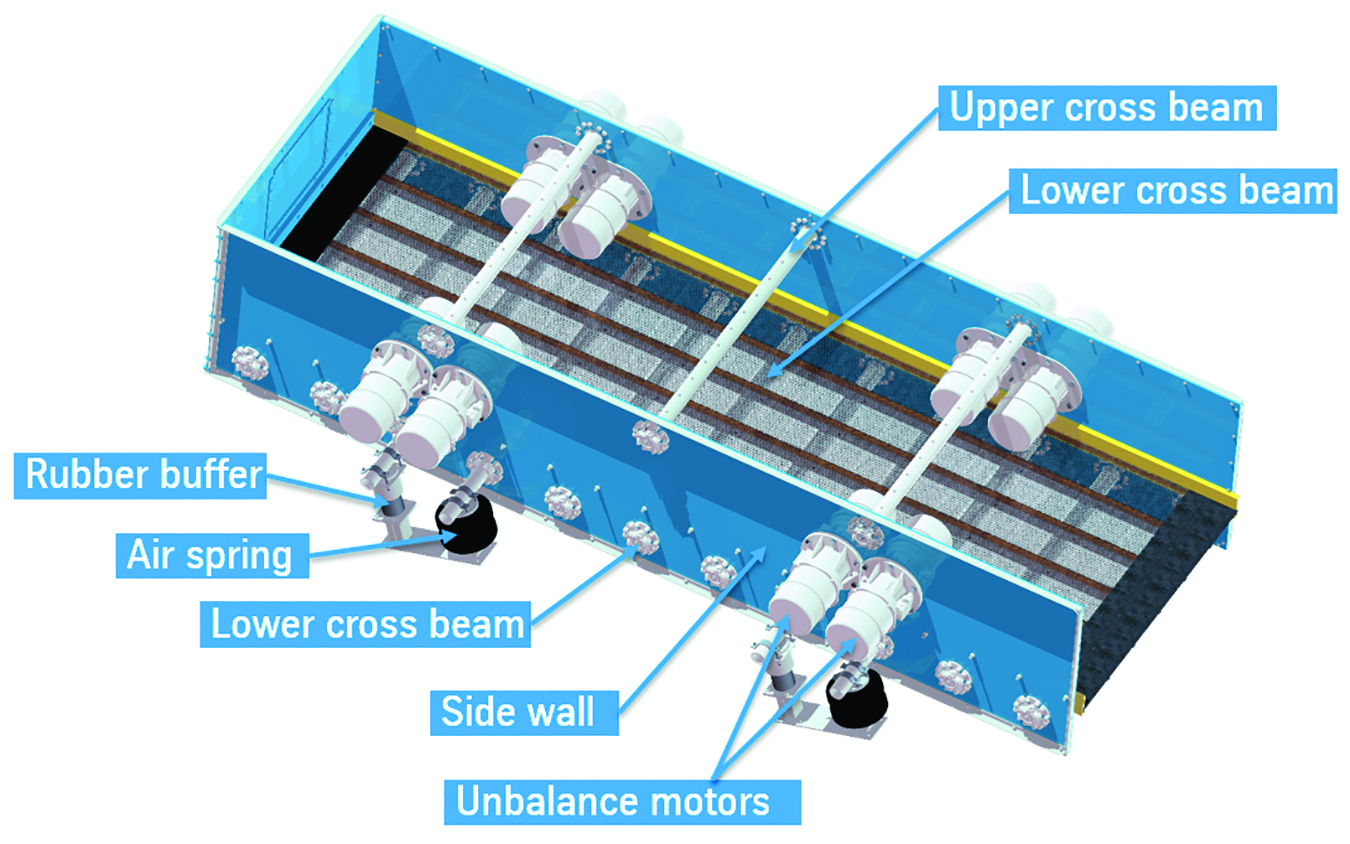 The screen motors are flange-mounted to the sidewalls and synchronized by a PLC system that not only controls all the motors but can adjust individual motor performance as needed.

thyssenkrupp Industrial Solutions’ newest product named goovi is an innovative family of single or multiple-deck vibrating screens. The goovi line, according to Peter Berlitz and Dr. Armin Greune, who coauthored a recent paper describing the new screen concept, features a patented drive system and design improvements that are claimed to substantially reduce overall screen weight, height and drive ratings. Berlitz is the company’s product manager of screens and Greune is head of thyssenkrupps’ standard machines, mining technologies business unit. The goovi name isn’t whimsical, according to the company. It’s a contraction of “good vibrations,” which was thyssenkrupp’s aim in developing a screen product intended for efficient secondary and tertiary screening applications.

As the authors explained in the paper, an examination of traditional vibrating screen designs shows limited flexibility due to their rigidity and mass, both of which are needed to withstand constant high dynamic loads. This makes it impossible for these screens to quickly react to changes in required product quality or in the properties of the feed material. Adjustments to meet these changes can usually only be done mechanically, leading to unscheduled downtime and possibly multiple corrections.

Moreover, synchronization of drives installed on both sides of the screen box (circular-motion vibrating screen) or installed centrally above or below the screening area (linear-motion vibrating screen) is mechanically complex, prone to wear, and requires lubrication equipment. Particularly in the case of circular screens, these mechanisms lead to limitations in the design of the screen width, thus limiting throughput rates.

Additionally, noted the authors, the space requirements and weight of common screen models not only affect the screen itself, but lead to high transport and assembly costs and have an adverse effect on the structural design environment of the screen and the drive power to be installed. Large, heavy screens require a corresponding substructure and suitable building structures. And, the higher the weight of the screen trays that have to be driven, the higher the screen’s energy consumption. 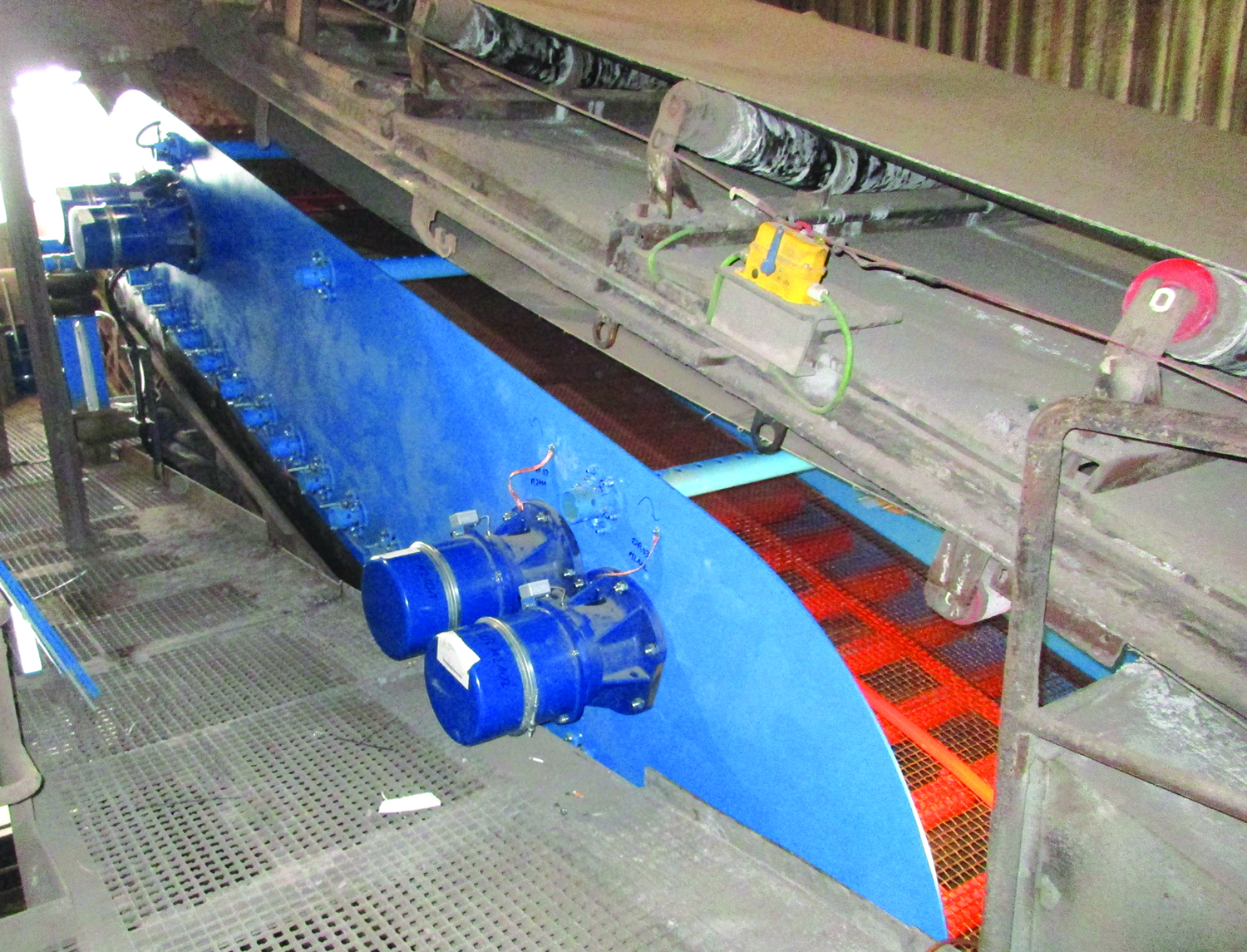 The goovi screen sidewalls are standard sheets that can be fabricated in any size and quality by laser cutting.

During development of the new goovi screen, thyssenkrupp targeted secondary and tertiary applications where feed materials with a particle size up to 80 mm are screened with a minimum screen cut of around 2 mm. Although the main focus was on the drive concept, which promised the greatest potential for optimization, other improvements affected the screen tray, screen support and control system. Basically, said the authors, goovi was designed for the digital mine and paves the way for Industry 4.0 in processing plants.

The drive system involves multiple motors placed at crucial drive points. The motors are flange-mounted to the sidewalls and are synchronized by a patented PLC system that not only controls all the motors but can adjust individual motor performance as needed. Consequently, the screen can adapt on-the-fly to changing material properties resulting from variations in the material, allowing even difficult-to-screen materials to be optimally classified. Specific recipes can be added to the control system and applied as needed.

The drive system, according to the authors, has no mechanical transmission components such as shafts or gears, as the motors are mounted directly to the screen sidewall and are synchronized electronically. As a result, maintenance requirements, weight and power consumption are significantly reduced, and because the motors are lifetime lubricated, periodic lubrication is not necessary.

The design team’s goals for the screen tray were to keep it simple, stable and easy to assemble. The sidewalls are standard sheets that can be fabricated in any size and quality in a laser-cutting process. In the lower section, they are connected by cross beams consisting of standard tubes protected against wear by polyurethane sleeves. In the upper section, a few beams of the same type are sufficient to stabilize the screen tray. According to the authors, this bolted and clamped structure endows the screen tray with high durability, a quality reinforced by the optimized position of the motors, which reduces the dynamic load in the sidewalls. 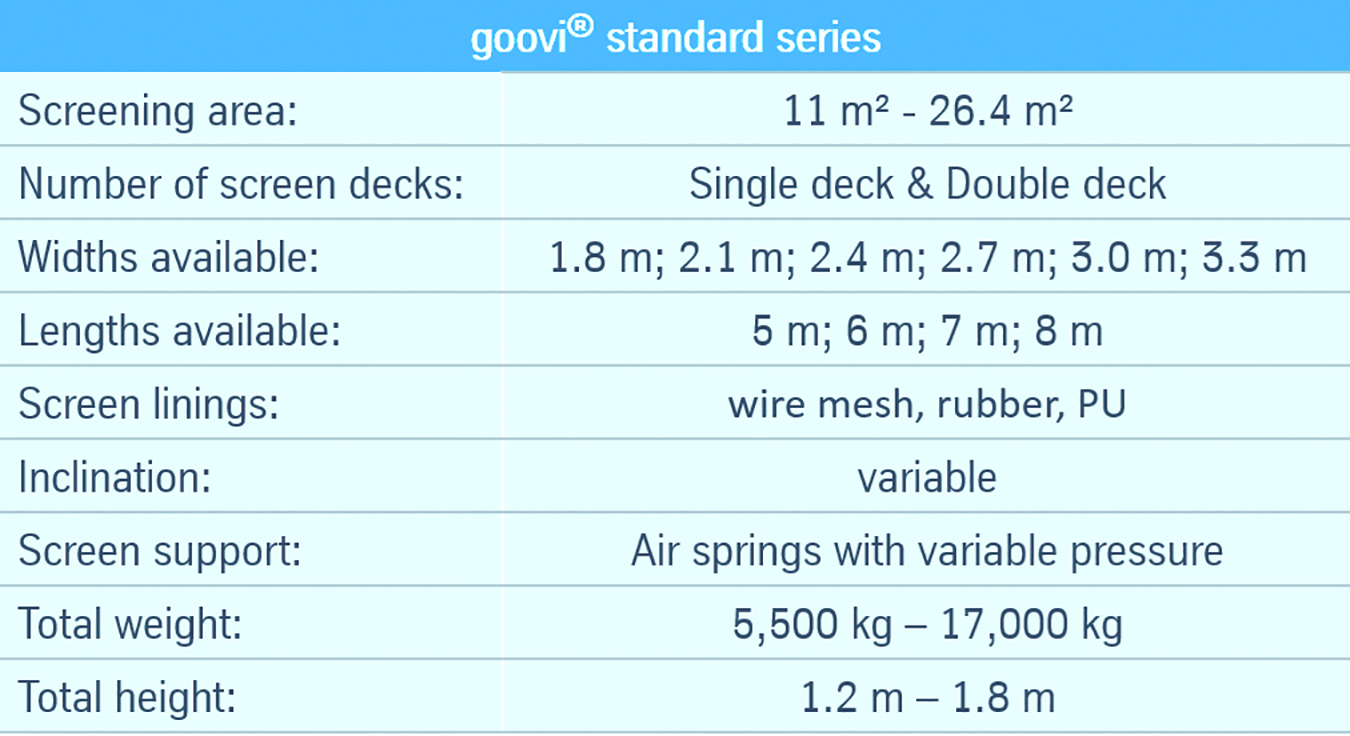 The goovi design also includes an unconventional approach to screen tray support: it is not suspended on steel or rubber springs, but instead uses air springs affixed to cross beams in the lower part of the screen tray. Pressure in the air springs can be incrementally adjusted to maximize screen height or optimize vibrational performance. Due to the lower spring constant when compared to steel or rubber springs, dynamic foundation loads are significantly reduced. Another benefit of this design is a considerable reduction in noise.

thyssenkrupp said it offers a model range geared to market requirements and reduce cost and delivery times. Single- and double-deck variants are available in six widths and four lengths, with screening areas ranging from 11 m2 to 26.4 m2 (see table above). In addition, the screen line’s modular design enables the company to supply customized screens to fit a customer’s specific needs.

Editor’s Note: FLSmidth A/S and thyssenkrupp AG announced in July they reached an agreement for FLSmidth to acquire thyssenkrupp’s mining business, which comprises open-pit mining equipment and systems, mineral processing solutions and material handling solutions. The deal is currently undergoing regulatory approvals in multiple jurisdictions, with expected completion in the second half of 2022.