GIW Industries, a supplier of heavy-duty centrifugal slurry pumps, reported that installation of its MDX pump technology at a major Chilean copper mine resulted in a significant reduction of total cost of ownership (TCO) for those pump applications, amounting to millions of dollars in savings for the customer.

Elias Aho, global sales and projects manager for GIW, said that a sulphide concentrator, owned by BHP Billiton and located in northern Chile, reported increased revenue due to productivity increases, with an additional savings in energy costs.

“TCO for slurry pumps includes not only the initial cost of the pump, but also factors such as wear life, annual cost of parts, labor, energy and downtime for maintenance,” said Aho.

All of these factors are addressed by the advanced engineering, materials and technology provided by MDX pumps, according to GIW.

The mine relies extensively on slurry pipelines to transport copper ore, but the slurry is hard on pumps and equipment. At this mine, every hour of downtime costs $150,000. To replace a slurry pump, the mill is offline for 10 hours. With the pump line that was previously installed, mill engineers were performing pump replacement eight times per year. The company had GIW installations for other applications and noticed greatly improved wear life with those pumps. Subsequently, the customer decided to replace its lower-performing pumps with GIW MDX technology.

The new GIW MDX pump, with an 84-in. (2.1-m) diameter impeller and weighing 100,000 lb (45,350 kg), replaced a 150,000-lb competitor pump, providing a lighter, more durable pump that runs on significantly less energy. According to GIW, the new MDX pump has already surpassed the client’s goal of doubling the wear life of the pump, and GIW engineers are now working on a program of continuous improvement, aiming to extend the pump’s wear life another 40% to 50%.

By cutting its maintenance downtime in half, the mine realized an $8-million increase in revenue. In addition, it has reduced its energy cost by an additional $1 million annually. 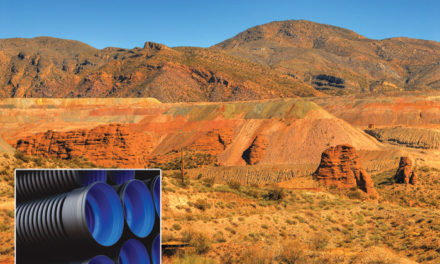 Polypipe Brings its Piping Systems to the African Mining Market