Kiruna, a remote region in the northernmost part of Sweden, is home to the iron ore pelletizing plant at Svappavaara, owned and operated by LKAB, a major producer of upgraded iron ore products for the steel industry and a growing supplier of industrial minerals products.

When LKAB needed to replace a section of kiln shell, riding ring, kiln support rollers and associated bearings on a 20 x 140-ft rotary iron ore pelletizing kiln, they called on Metso to plan and execute the project, having had a 4-year working relationship with this supplier.

“This is one of the biggest repair jobs ever carried out at Svappavaara,” said Petrus Esberg, maintenance engineer for LKAB. “The need to replace the kiln shell section has been apparent for several years due to cracks in the shell and stress cracking of the riding ring.” The situation was constantly monitored and a slowdown in the market finally afforded LKAB the opportunity to make the repairs.

According to Metso’s Chris Johnston, supervisor for field service and retrofits, the project required extensive preparation ahead of the installation. “LKAB brought in four cranes for both heavy lifting and precision positioning” he said. “Metso had to coordinate multiple manufacturers and sub-contractors for all the parts and replacement items.”

The sheer size of the kiln and weight of the parts—the old shell section and riding ring weighed 178 mt—presented some unique challenges, but Johnston said that the project provided a great educational, as well as technical opportunity for Metso. “Typically, we would not need more than one field service engineer on site,” he explained.”But this was such an unusual mechanical challenge that we brought in six more engineers so they could learn from the experience.”

“It was really a precision job,” said LKAB’s Bengt Andersson, who had overall responsibility for the project.  “There was zero tolerance when the new bearing ring and 5.5-meter-diameter casing was installed. Because of everyone’s commitment to the project we avoided any major disturbances.”

LKAB said it was also pleased with how Metso handled the various sub-contractors. According to Johnston, the co-operative effort between Metso’s offices in Danville, Pennsylvania, USA and Kiruna was key to the successful completion of the work. “Bengt Hedlin did a great job in the bid process and awarding of contracts,” he said. “With several manufacturers supplying so many different components, there could have been a lot of problems. But we handled it to the complete satisfaction of the customer.”

Coincidentally, LKAB announced in June that it had received several new orders for pellets and fines for delivery during the summer, and subsequently had moved back the date of its planned summer production stop. Under the new schedule, the KK4 pelletizing plant in Kiruna was to operate until July 7 and production of fines (MAF) in Malmberget will continue until July 9. Mining and railway operations will also be subject to the change.

Acting President Lars-Eric Aaro said the orders were mainly for deliveries to new customers in Asia, but “we also see a demand in the Middle East, as well as in Europe, where steel producers are starting to replenish their stocks again, although at modest levels.”

According to Rohan Young, production superintendent at Multotec Process Equipment, wear is a major issue in spiral concentrator applications. Multotec’s response is the launch of a lightweight polypropylene product collection launder designed to achieve effective and efficient channelling of spiral products.

“Wear characteristics were one of the primary factors considered during the design phase of the new production collection launder,” said Young. Multotec Process Equipment identified the need for an innovative solution but decided that the standard materials of construction available, such as fiberglass and HDPE, did not achieve the desired wear characteristics and impact on the life cycle of the product itself. Instead the new product collection launder has an integral cast polyurethane lining rather than a sprayed lining—giving this product an above-average and consistent wear lining characteristic, according to Multotec.

The method of manufacture ensures a consistent polyurethane lining thickness throughout the inside of the launder. “Consequently there is no need for additional liners to be fitted inside the launders,” Young said. A further advantage for existing plants is that the new product-collection launder can be retrofitted to replace similar launder systems where wear is an issue. The launders’ noncorrosive properties are especially significant where the product collection launder is being used in applications subjected to high levels of humidity and excessive moisture that could cause corrosion. The design and lightweight construction also facilitate a faster launder installation process in comparison with product collection systems made from steel, which require extensive rigging for installation.

The polypropylene launders are designed to suit small-diameter spiral banks of 2, 4, 6 and 8 and are engineered to allow optimum flexibility in application, said Multotec. They can be manufactured to accommodate various bank sizes for both Multotec and third party spirals. “Although we initially focused the new launder project on the mineral sands and heavy minerals sectors of the market, ongoing research and development work will ultimately see this range expanded to the larger diameter spirals,” Young said. “In addition, by undertaking all the manufacturing work in-house, we are able to facilitate faster lead times to the market.”

The new launder product has been field tested and units are now successfully operating in installations on both Multotec and other branded spirals. “The feedback we have received from customers is that they are achieving superior wear life on their spiral installations with the new launders,” Young said.

AngloGold Ashanti Settles With a Waterspider

Previously settling ponds for dewatering have been drained and mechanical means then used to remove the silt. “This was a time consuming and costly exercise”, according to Ian Farquhar, dewatering manager at Weir Warman Africa. But at Klerksdorp in South Africa, AngloGold Ashanti is now using a Multiflo Waterspider which is the first such unit to be locally manufactured and commissioned by Weir Warman Africa. The Multiflo Waterspider will allow ongoing cleaning of the settling ponds with minimal fuss and interruption to normal activities.

Farquhar explained that the Multiflo Waterspider is essentially a flotation device used for light dredging of settling ponds. The floating platform allows two operators to be on board to facilitate the setting of the depth of the pump at any time. “The platform, built in two components, allows easy transportation as well as assembly and disassembly. This facilitates optimum flexibility in terms of where the pontoon is used.”

Measuring 3.5 m in diameter, the platform is seated on three heavy-duty flotation tanks which are specifically produced for this application and allow a total load-bearing capacity, including the structure, of three tons. “It was designed to take the load-bearing capacities of the equipment and operators into account while still having a lightweight construction to allow optimum dewatering,” Farquhar said.

The Multiflo Waterspider comprises a Warman SHW heavy-duty submersible pump with a robust integral mechanical agitator which is lowered into the silt to facilitate the agitation of the settled solids to create a consistent percentage of solids in suspension. The Warman SHW pump has a capacity of 45 liter/sec at a maximum head of 28 m. While it is not necessary for the operators to stay on the platform to regulate the depth of the pump, being present does enable them to move the pontoon around the pond in order to ensure that the pump does not foul up in the silt, said Farquhar. This facilitates more effective clearing of the settling dams.

“Apart from meeting Weir Warman Africa’s quality specifications the Multiflo Waterspider has also been manufactured to AngloGold Ashanti’s safety design and specifications,” Farquhar said. It is equipped with kick plates at the base of the platform to prevent slips and safety rails are fitted around the platform itself. It has a lifting gantry to facilitate installation and removal of the pump; and is also equipped with buoyancy aids. “In addition,” he added, “we color-coded the Waterspider to the AngloGold Ashanti safety specification whereby the gantry is red, the top rail of the platform is yellow and the remainder is red and black.”

Installed and commissioned in March 2009, the Multiflo Waterspider has produced a positive customer reaction and Weir Warman reports that an order for another two such Multiflo Waterspiders is imminent. Although this unit is considered as a standard product within the Weir Warman Africa dewatering product range, individual floating platforms can be customized to suit varying applications and sizes of dams and settling ponds using a vast range of pump types and models. 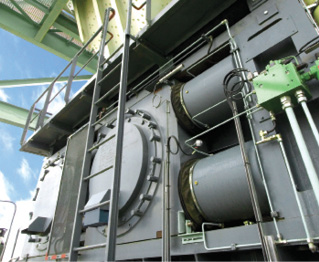