As regulations governing carbon emissions become stricter and the price of high-grade reductants such as coke continue to rise, producers are increasingly searching for more sustainable and economically viable alternatives for smelting operations. 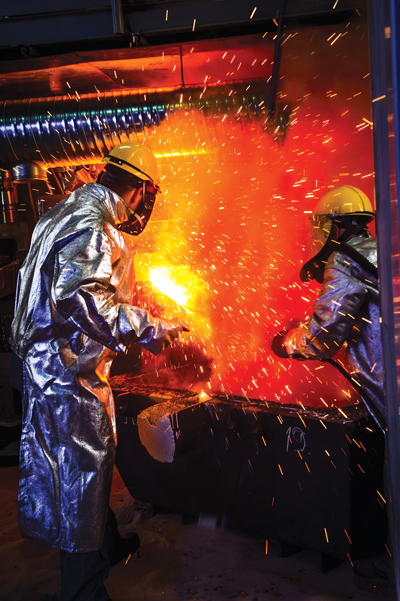 Mineral processing specialist Outotec believes its DC (direct current) smelting technology offers a cost-efficient and environmentally sustainable solution for ferroalloy processing. For example, it can be used for direct smelting of ores with no pretreatment and also offers a cost-efficient method for recycling challenging byproducts such as dust from steel production.

Typical applications for direct current smelting include ferrochrome, ferronickel, and ilmenite, and dust recycling in steel production, especially stainless steel. Highly flexible, DC smelting can be used for processing feed ores with very fine particle sizes, or those with highly variable chemical or mineralogical compositions. This flexibility opens up opportunities for making sustainable use of reserves that would have previously been considered unviable using conventional smelting technology.

“DC smelting offers a significant advantage over traditional methods in this regard,” said Lauri Närhi, Outotec’s technology director–ferroalloys technology. “As well as cheaper, lower-grade reductants such as anthracite or coal, it can also make use of carbon-neutral bioreductants produced from renewable sources like charcoal made from local wood. Using these types of bioreductants can help producers to cut the carbon emissions of their operations and reduce their reliance on increasingly scarce fossil-fuel resources.”

In DC smelting, the feed material is gravity-fed into the furnace, together with the reductant, via charging tubes. A continuous direct electrical current is supplied by a transformer and rectifier, with a central graphite electrode forming the negative cathode and the bottom of the furnace forming the positive anode. The smelting energy is supplied by an open plasma arc, which can be likened to a giant welding torch. The alloy sinks to the bottom and the slag floats at the top, while the off-gas produced is extracted and cleaned. The gas can be used as a combustible fuel elsewhere in the plant, helping to improve energy efficiency.

One of the biggest potential sustainability benefits of DC smelting technology lies in recycling. It can be used to process and recover value from fine materials such as the dust that results from the production of steel and other metals. A steel plant can produce tens of thousands of tons of fine dust every year, and this material is very difficult to treat, often ending up in landfill sites.

Complementing existing smelting operations with a DC furnace will significantly reduce waste volumes by enabling these fine materials to be recycled with no need for complex and expensive agglomeration or pelletizing equipment, according to Outotec. Furthermore, the dust resulting from steel production, for example, contains valuable materials such as iron and zinc, and these can be extracted using the DC process. For smaller-scale operations, Outotec DC smelting is a viable alternative to traditional smelting—the simpler layout and smaller furnace mean that the plant footprint is significantly smaller.

In the future, it is hoped that the technology will play an important role in supporting zero-waste production. “Zero waste is becoming an increasingly important goal, particularly in Europe,” Närhi pointed out. “This is where 100% of the materials entering the plant leave as either finished product or end up being reused, recycled or converted into energy—with none going to landfill. The ability to recycle and recover valuable metals from previously dumped material offers huge environmental and economic benefits for producers.”

The demonstration plant at the Outotec Research Center in Pori has played an essential role in developing the DC smelting process by allowing testing of a wide range of raw materials and reductants. The center’s unique capabilities cover the entire concept and product development chain, from mineralogical analysis of feed material to the scaled-up process and operating parameters. One key goal for future development will be to further improve the energy efficiency of the process, for example through pre-reduction of the feed material prior to smelting, which reduces the electricity consumption of the furnace.

“Without the ability to test different feeds and reductants in a pilot-scale DC furnace, the technology would not have moved on nearly as quickly,” Närhi said. “The Outotec Research Center is helping us realize this and many other sustainable processes for our customers within a much shorter timeframe.”

Outotec’s history with DC smelting began in the 1980s, when it was first researched by Outokumpu. The process was revisited in 2011 when it was decided that the required technology was sufficiently advanced to make the process commercially viable, and construction of a pilot-scale DC furnace at the Outotec Research Center in Pori, Finland, began.

“The ability to offer sustainable technologies and services to our customers with less harmful impact on the environment is a key driver of our R&D process, and the DC smelting process is a perfect example of this,” said Närhi. 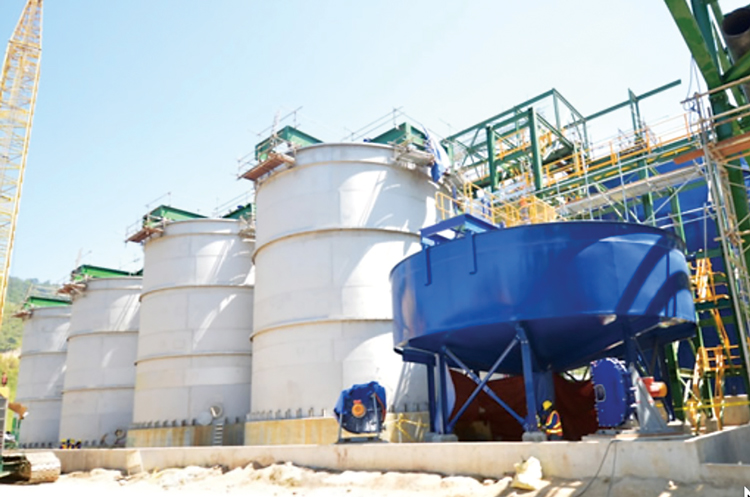 BIOX reactors and concentrate thickener at a Philippine project.

By late summer of this year, global gold prices had dropped to a five-year low and many gold producers were frantically searching for ways to cut their all-in sustaining costs (AISC) to a level that would prevent them from operating at a loss. With prospects diminishing each year for discovery of new high-grade deposits that could propel a company back into the black, it’s likely that innovative processing developments may play a larger role in the future of many of these producers faced with the challenge of getting more out of less while meeting increasingly stringent environmental standards. Two recent industry developments highlight areas of interest.

The program of technology transfer and improvement, dubbed by industry as “Project 420,” is now in its sixth iteration and is preparing for a seventh under AMIRA International, an Australia-based organization of minerals companies and suppliers that has developed, brokered and facilitated collaborative research projects since 1959. The program focuses on a collaborative approach to software modeling in the metallurgy space, and at a cost to date of just under A$18 million (in today’s Australian dollar terms), AMIRA said it is conservatively estimated that Project 420 has improved efficiencies and gold processing modeling to save more than AU$200 million in operational costs over the past two decades, and has identified opportunities for recovery increases and lowering of losses amounting to A$20 million a year.

AMIRA International has its head office in Melbourne, Australia, and also has bases in South Africa, the United States and Chile.

Project 420 was initially guided by the Parker Centre, an Australian co-operative research center that closed in 2012, and since then has resided at Western Australia’s Curtin University, within the university’s Gold Technology Group.

AMIRA Managing Director Joe Cucuzza said the benefits and breakthroughs of Project 420 have included development of a suite of software models to simulate and optimize carbon management within carbon-in-pulp and carbon-in-leach circuits, optimization of grind size for gravity and leach recovery, an integrated approach to deportment of gold in operational circuits, a general improvement in recovery of valuable metal, and a better understanding of ore characterization.

In addition, significant inroads have been made in the area of pre-concentration and coarse particle gangue rejection, allowing a fresh look at low-grade ores. The inroads extend to the developments of new benign leach reagents such as amino acids for the leaching of gold, silver and copper minerals, which AMIRA believes may prove to be transformational for the industry.

According to Cucuzza, one sponsor representative reported that in the latest iteration of Project 420, a single mine site in South America had utilized the technology to realize more than A$6 million a year in cost savings and recovery improvements.

Another sponsor, St. Barbara Ltd., said that guidance from the Project 420 team led the company to specific cost-saving initiatives, which have delivered company-wide savings of several million dollars over the three-year project term.

Improved gold processing knowledge by the plant metallurgists, as a result of the on-site workshops, led to better gold leaching, elution and carbon management practices. This directly resulted in increases in gold recovery and lower plant operating costs, according to an AMIRA press release quoting St. Barbara’s senior project metallurgist.

Each iteration of Project 420 is for a three-year period, with iteration six due for completion at the end of May 2016. Fourteen member companies across the world have funded the latest program, and they share in the benefits.

“This collaborative gold processing technology has allowed member companies to pool and retain knowledge and experience in the gold processing value chain, and benchmark performance,” Cucuzza noted. “This project has even led to important environmental and social license advances as a result of modeling the improved use of recycled process water, and control and balance of cyanide in the processing of gold.”

Iteration seven will focus on reducing the cost of processing lower-grade material and difficult ore types as well as lowering inputs of water and energy, and managing poorer or variable quality water used in minerals processing. It will also look at improving capital and labor productivity, and maintaining social license to operate.

Meanwhile, in late July, Outotec reported that it agreed to acquire the majority of the shares in Biomin South Africa and certain assets from Biomin Technologies S.A. in Switzerland. With this acquisition Outotec gets the full intellectual property and marketing rights of BIOX bioleaching technology, a method for treatment of refractory gold ores. The acquisition price was not disclosed.

Outotec said Biomin’s BIOX technology complements its portfolio of gold processing technologies. Gold orebodies are becoming more complex to treat and consist of refractory ores as the less refractory gold ores become depleted. Roughly 20% of the world’s current gold projects and a third of upcoming projects are based on refractory ore that needs to be pre-treated before the leaching process. There are three main pre-treatment methods for refractory gold ores; pressure oxidation, roasting, and bioleaching. BIOX, said Outotec, is proven technology for bioleaching and its annual business volume has been in the area of millions of euros.

Research on the BIOX technology began in the late 1970s, and the first BIOX license was solid in 1986. Biomin has developed improved iterations of the process over the years, with the latest version introduced in 2013.

Gekko Records Two-plant Order for Hope Bay
TMAC Resources recently placed an order with Gekko Systems to design and build two surface modular Python plants followed by a concentrate treatment plant in Hope Bay, Canada. The project, located within the Arctic Circle, will be delivered in two stages over a two-year period with completion of the 1,000-metric-ton-per-day (mt/d) Stage 1 plant estimated by the end of 2016.

The modular facility has been designed to initially treat 1,000 mt of mill feed per day and reach maximum capacity of 2,000 mt/d in early 2018. 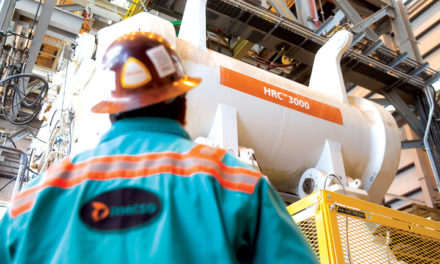 Polypropylene Pipe Helps ‘Bugs’ do Their Work at Palladium Mine