This year, the synthetic crude producers in Alberta predict that they will average 721,000 barrels per day, which amounts to mining 1.4 million tons per day of oil sands. This figure is expected to double in the next 10 to 15 years.

Moving that amount of material requires skill, technology and patience. Although the basic premise of the hot water process developed by Dr. Karl A. Clark to separate the bitumen from the sand in a slurry has not changed, the individual pieces of equipment have improved and the capacity of the processing facilities has grown considerably.

The slurry passes through three distinct processes: ore preparation, extraction and froth treatment plant, prior to upgrading and refining. Prior to ore prep, the size of the material is reduced using some form of comminution. At the ore prep facility, the oil sand is mixed with hot water to form a slurry.

The slurry is then pumped a fairly long distance (2 km to 5 km) in a hydro-transport line. During hydro-transport, the bitumen separates from the sand particles and the water ina process referred to as ablation.

The slurry from the hydro-transport line dumps into a large vessel for gravity/flotation separation, commonly referred to as the primary separation cell (PSC). The PSC overflow, containing bitumen froth, reports to froth treatment. The other two PSC streams, the middlings and the coarse tailings (underflow), can be treated several ways. Some plant operators take the underflow from the PSC (coarse material) and pass it through a bank of hydrocyclones where the underflow is sent directly to tailings and overflow is sent to a flotation circuit. The overflow from the flotation circuit reports back to the feed stream from the PSC. Other oil sands processor takes the underflow and puts it through a flotation circuit prior to the cyclone stage. Middlings are treated using flotation.

The primary purpose of froth treatment is to remove the residual water and solids. Because the bitumen is so viscous (60% bitumen, 30% water and 10% solids), the mixture is cut with diluent, which is a light hydrocarbon, and that’s where it diverges from operation to operation. Some plant operators use naptha and others use paraffinitic solvents. To separate the water and solids, they use gravity-based techniques, but it varies from site-to-site, and includes inclined-plate separators, counter-current decantation (thickeners), cyclones with incline plate separators, centrifuges, or several permutations thereof.

The process also varies as to how the tailings are treated. Some operators treat at least some of the tailings stream with a thickener, allowing for warm water to recycled. Others send the tailings stream straight through to a settling pond. From an environmental perspective, tailings impoundments have become a point of concern and the industry is searching for a more appropriate way to handle the tailings.

According to Paul Keyser, director, oil sands business development, FLSmidth, in addition to the growth of the equipment, the technology for individual unit operations has improved. FLSmidth supplies equipment for all three stages of the liberation process. “The largest improvement is the area of materials of construction and how well the machines wear, which improves overall reliability,” Keyser said. “Instrumentation and monitoring has improved greatly with advances in technology.”

Through a series of recent acquisitions, FLSmidth now carries everything from sizers to slurry pumps to thickeners. “More than that though, we have made a commitment to continue to be an active partner in the field of oil sands processing,” said Keyser. “By bringing all of FLSmidth expertise to bear, we are making a more coordinated effort to help the oil sands companies advance their operating plans.”

The units are optimized for a high product to pulp ratio. The mixing system is designed to provide high shear and energy intensity to maximize air dispersion and promote bitumen/air contact to enhance recovery. Special high efficiency launders have been designed to accommodate the large volumes of free flowing froth generated in oil sands application. Several ergonomic features are built into the machine, including tank man-ways for easy access.

The flotation machines also make extensive use of wear resistant materials and design. “The tanks are hydro-dynamically designed to provide effective pulp mixing while allowing for coarse, un-floatable material to pass through the cell without going through the mixing mechanism,” Keyser said.

With the evolution of bitumen extraction, cyclones have also evolved. Initially, smaller 15- and 20-inch diameter cyclones were used. With the advent of Krebs gMAX technology, larger 26-inch units are currently being used. “This allows operators to process huge tonnages with fewer numbers of cyclones without sacrificing cut size,” Keyser said. “The larger size cyclones also have less issues with plugging.”

The gMAX technology improved two aspects of the hydrocyclone, the cone angle selection and a re-designed inlet. Selection of the proper cone angle is critical to achieving the cut sizes required by the oil sands industry. The inlet reduces turbulence and decreases bypass of coarse material to the overflow. “It also wears better than previous generations of cyclone designs, increasing wear life by up to two times or more,” Keyser said.

More recently, FLSmidth Krebs introduced Smart Cyclone technology, an instrumentation package to monitor the condition of the underflow stream and to measure, in real time, the wear in the hydrocyclone.

To meet new tailings deposition regulations, the design of the thickeners and the criteria for testing also changed. “The newest of these criteria to determine the design of a thickener was the rheology or the measure of how well slurry flowed and the pump type to get the underflow solids to the deposition site,” Keyser said. “The use of paste thickeners to produce high underflow densities became widespread. A key part of this technology is the process conditions required for optimal flocculation which is required to maximize unit loading (minimize unit area) and also the thickened mud settling characteristics.”

Thickeners are now being installed with single floor slopes as opposed to dual slopes. Although excavation costs may increase, the single slope allows for a more even transfer of mud from the tank outer dimensions to the discharge trench and less torque and stress on the rake at the transfer point between slopes, Keyser explained. Oil sands thickener designs now allow for deeper mud depths from less than 1-m to 2- to 6-m or higher to obtain higher underflow densities depending on the application and deposition site requirements.

Drive torque and the resulting design have also increased by a factor of two to three. “This is due again to the underflow solids required by the tailings process and the rheology or yield stress associated with the solids and deposition site requirement,” Keyser said.

It is safe to say that today’s oil sands fine tailings thickeners are more high density than traditonal high rate and are capable of producing underflows to 60% by weight. For those applications that require paste technology, thickener designs have taken the next step in their evolution and are currently in high tonnage service in other industries such as base metals.

The next hurdle for the synthetic crude producers will be will be tailings management. Raw oil sands contain 10% bitumen, 85% solids and 5% water. With annual production of more than 600 million tons, the mines will have to find a way to store more than half a billion tons of tailings a year.

“While the means has yet to be determined, the producers will likely to move away from or greatly reduce the use of impoundments,” Keyser said. “This is an area where FLSmidth is focusing a lot of its efforts. We are working aggressively on new technologies to help them accomplish this in a cost-effective manner.” Keyser believes that, in the future, the industry will be moving from its traditional approach toward paste type technologies. Currently the industry is investigating technologies, such as advanced paste and high density thickeners, and unique filtration technology, that can be applied to help solve the tailings problems. 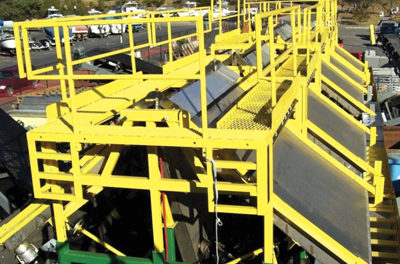