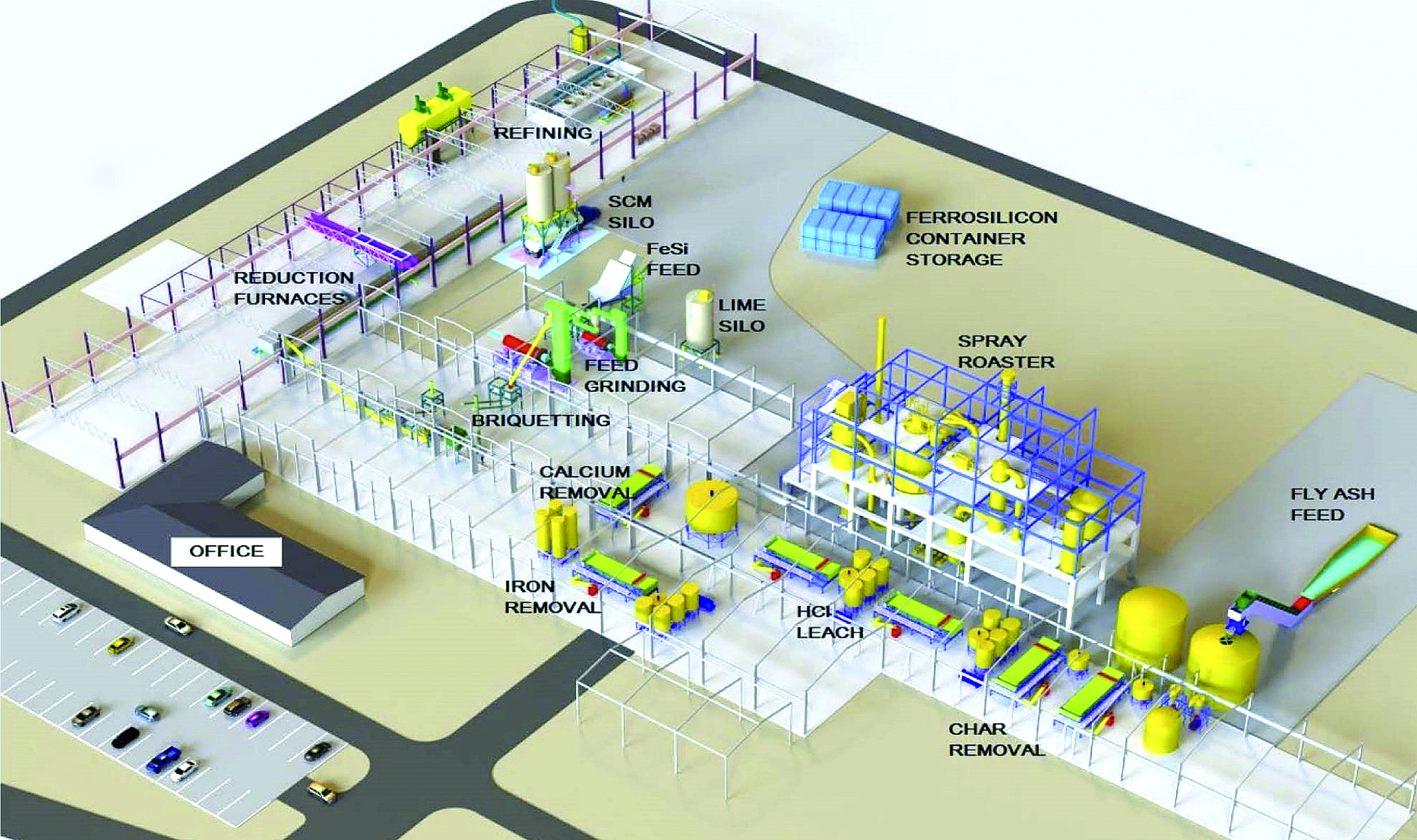 Preliminary plant layout diagram for Latrobe Magnesium Ltd.’s proposed demonstration plant that will use a process of combined hydromet/thermal reduction to extract magnesium from coal waste material. The demonstration plant, located in Victoria, Australia, will initially be capable of producing 1,000 metric tons of magnesium metal per year.

Metals-processing technology specialist Tenova was recently awarded a contract by Latrobe Magnesium Ltd. (LMG), an Australian company, to provide engineering, supply and supervision for a demonstration plant that will use a process of combined hydromet/thermal reduction to extract magnesium from coal waste material.

The demonstration plant, located at an existing industrial site in Latrobe Valley, Victoria, Australia, will initially be capable of producing 1,000 metric tons of magnesium metal per year. In a second planned stage, LMG intends to develop a commercial scale operation with an anticipated production capacity in the range of 10,000 to 40,000 mt/y of magnesium metal.

Using patented hydrometallurgical extraction and thermal reduction processes, the plant will harvest magnesium metal from a fly ash resource – a waste stream from brown coal power generation. The technology, according to Tenova, will convert nearly 100% of the resource into commodities such as supplementary cementitious material (SCM), silica and iron oxide in addition to magnesium oxide (MgO), with released CO2 emissions approximately 50% less than comparable magnesium production plants.

• converting MgCl2 into MgO while recovering the HCl for reuse in the process; and

“Demand for magnesium worldwide is strong,” said David Paterson, CEO of LMG. “Currently, the Latrobe Valley contains 25 million tons inventory of fly ash, that is why it so important for us to have a reliable partner in this project.”

“Through many years of experience and continuous improvement of pyro hydrolysis process, Tenova is able to meet specific customer requirements. The positive and constructive cooperation with Latrobe during the development phase of the magnesium production facility was a decisive factor to now deepen this work in the course of realization,” said Gregor Kappacher, branch manager at Tenova Austria, the competence center for spray roaster technology. “The project is of paramount importance for Tenova, because it opens positive future perspectives and is in line with our effort towards achieving a sustainable industry.”

The first magnesium is scheduled to be produced in 2023. Once the demonstration plant is operating successfully, it will be expanded to a commercial production facility, according to Latrobe, with a final decision on plant size to be made after completion of geotechnical and mine planning work on the resource.

The company also noted that it will complete a prefeasibility study in 2022 on a 100,000-mt/y magnesium plant using ferronickel slag as feedstock to supply the magnesium market. The plant will be located next to a renewable energy facility. LMG estimates the capex requirement would be $915 million with working capital of $85 million, and is seeking an equity contribution from a joint venture partner.