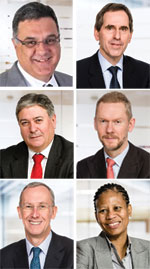 Caledonia Mining appointed Dana Roets as COO. He started his career with Gold Fields at the St. Helena Gold Mine. More recently, he was the COO at Great Basin Gold.

Gold Fields appointed Alfred Baku as senior vice president and head of its West Africa region. Baku will also join the Group Executive Committee. Baku, who is currently vice president of operations for the West Africa region, is the first Ghanaian to head up the region. Three nonexecutive directors have voluntarily resigned from the Gold Fields board following a decision to reduce the number of board members from 12 to 9. Delfin Lazaro, Roberto Dañino and Rupert Pennant-Rea agreed to step down from the board with immediate effect.

Thompson Creek Metals Company Inc. appointed Jacques Perron as CEO and director, effective November 1. Perron will succeed Kevin Loughrey, chairman and CEO, who previously announced his retirement. Timothy Haddon, lead director, will succeed Loughrey as chairman of the board of directors. Perron previously worked at St. Andrew Goldfields Ltd. where he served as president and CEO since 2007.

Mamba Minerals named Michael O’Keeffe as chairman. He was on the board of Riversdale Mining at the time of its inception in 2004 and was appointed chief executive and executive chairman in 2006. Prior to his involvement with Riversdale Mining, O’Keeffe was managing director of Glencore Australia.

Verde Potash announced Antônio Schettino has joined the company as the COO. Schettino joins from MMX Mineração e Metálicos, where he was COO. Pedro Ladeira, current COO, will continue with Verde as a technical advisor focusing on the company’s pyro process.

Equinox Copper announced that Nilda Lay, a senior geologist, has been named a consultant to the operations in Chile. Lay, a Chilean national, has more than 30 years of experience, including work with BHP. Lay worked with five other geologists to define the initial copper ore reserves at BHP’s Escondida porphyry copper deposit.

Åke Roos has been appointed general manager for Boliden Rönnskär, succeeding Roger Sundqvist who has decided to leave Boliden. Roos has extensive experience in the metal business and joins Boliden from Sandvik.

Northern Star Resources Ltd. announced the appointment of Stuart Tonkin as COO. Most recently he was COO for mining contractor Barminco.

Quaterra Resources announced several management changes. Dr. Thomas Patton will move from his position as president and CEO to become the chairman. Steven Dischler, previously vice president and general manager of Yerington, has been appointed president and CEO and director and will continue to be responsible for Yerington and will assume leadership responsibility for corporate strategy, operations and administrative functions.

Midway Gold announced that John Labate, effective August 20, will step down as CFO for personal reasons. Fritz Schaudies will re-join the company as interim CFO.

Brades Resource Corp. announced the appointment of Brian Biles as president, CEO and a director. He will oversee the exploration and development of the company’s porphyry copper-gold property in northwestern British Columbia and the recently announced Lorne Lake uranium property in the western Athabasca basin of Saskatchewan.

IchorCoal N.V appointed Jonathan Collins as the new general manager of Vunene Mining Ltd. He is following Bertus Venter who has been responsible for Vunene’s Usutu Colliery since 2006. He will stay with Vunene Mining as a consultant.

Rum Jungle Resources Limited announced the appointment of Bruce Arnold as CFO and secretary following the retirement of Christopher Moyle. Arnold is a chartered accountant with more than 30 years of commercial experience including 20 years in mining and industrial possessing businesses.

Freeport-McMoRan Copper & Gold Inc. announced that co-founder B.M. “Mack” Rankin, vice chairman and a member of its board of directors, died at the age of 83 after a courageous battle with cancer. Rankin co-founded McMoRan Oil & Gas Co.in 1969 with James R. Moffett and W. K. McWilliams.

Bear Creek Mining announced the promotion of Elsiario Antunez de Mayolo to COO. He will continue as general manager of the Peruvian subsidiaries, a position he has held since joining the company in March 2010.

Rail-Veyor Technologies Global announced the appointment of Frank Ward as the company’s vice president of sales and marketing.

Atlas Copco has appointed Johan Halling as president of the Mining and Rock Excavation Technique Business Area and member of group management. Halling has been president of Atlas Copco’s Rock Drilling Tools division, based in Sweden, since 2002. He replaces Bob Fassl, who is leaving Atlas Copco for personal reasons.

Gindalbie Metals Ltd. advised that Karara Mining’s board has decided to combine the roles of CEO and the CFO. Paul Sims, the CFO, will take over as acting CEO. In line with this transition, CEO Steve Murdoch will step down from his position.