Study: Gold Grade and Output Down in 2020, GHG Emissions Stable 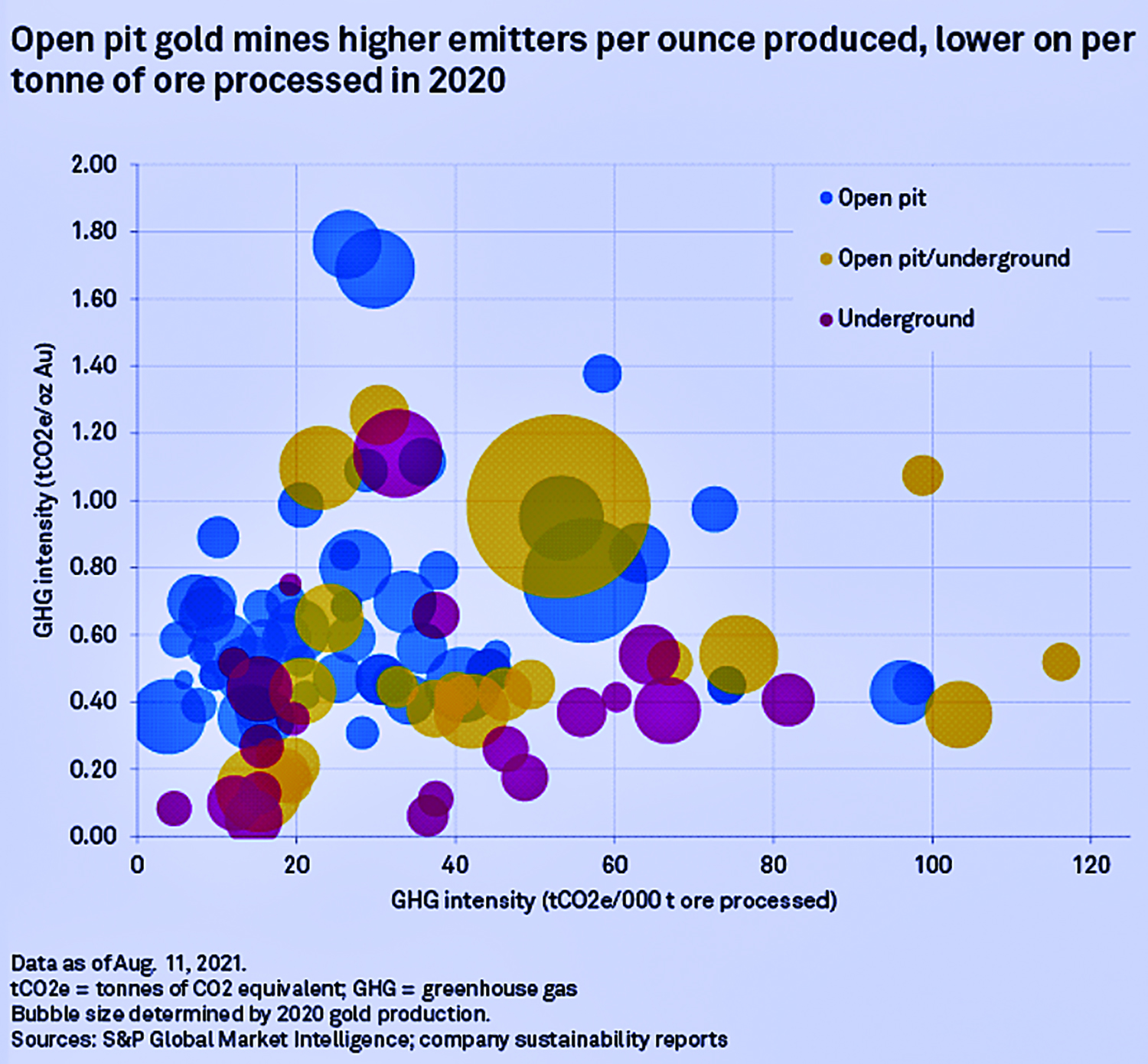 The S&P Global Market Intelligence study, Greenhouse Gas and Gold Mines — Emissions Intensities Unaffected by Lockdowns, found that mining grades declined in 2020, and the drop in grade resulted in lower gold output, which caused a drop in per-ounce emissions intensity. Overall, per-ounce intensity increased by 13% at underground mines, but declined at open pits; however, per-ton emissions intensity remained quite stable in general.

Metal and Mining Research Analyst Christopher Galbraith, author of the report, explained: “Lockdowns did occur in a number of regions in 2020, but overall, they didn’t cause much change in terms of emissions intensity of a pro-
ject. A period of lockdown might have caused a drop in output, but the emissions are coming from operating the mines. During the lockdown, the equipment and the mills were shut down, therefore, the emissions would decline. A drop in emissions divided by a lower output (or throughput for that matter) can just as easily yield the same emissions intensity.”

Emissions intensity averaged 0.697 tons of carbon dioxide equivalent (tCO2e) per ounce of gold produced, a negligible decrease year over year. On a per ton of throughput basis, emissions intensity increased incrementally, up less than 1% to 28.7 tCO2e per thousand metric tons of ore processed.

According to the report, Russia ranked high in emissions-intensity change. On a per ounce basis, Russia’ average emissions intensity was down 24% year over year; a 9% increase in grade was instrumental in that outcome. With the region’s per-ton emissions intensity also inching downward year over year, however, grade was clearly not the only driver. The largest gold miner in the country, PJSC Polyus, led the decline in intensity. Actual emissions fell between 18% and 58% at four of Polyus’s operations, including a 23% drop at its largest, the Olimpiada and Blagodatnoye mines, which report combined emissions. Polyus has been implementing local initiatives to reduce emissions across its operations; however, due to the company’s revised methodology behind the calculation of Scope 1 emissions, it is still unknown whether actual emissions from Olimpiada and Blagodatnoye declined year over year.

With gold output slightly more than half that of Polyus in 2020, Russia’s second-largest producer, Polymetal, reported an emissions increase of nearly 44% year over year, largely reflecting a scaling-up of operations at the Kyzyl and Varvara mines in Kazakhstan. Throughput was up 22% and the average grade increased. With the rise in emissions outpacing the increase in gold output and ore processed, the company’s emissions intensities increased on both a per ounce and a per-ton basis, by 37% and 18%, respectively, in 2020.

“Despite fluctuations at many operations, emissions intensities globally remained relatively stable on average in 2020, just below 33 tCO2e per thousand tons of ore processed,” the study concluded. “On a per ounce of gold produced basis, falling grades and a period of lockdown in 2020 increased emissions intensities across some operations, but year-to-year fluctuations in actual output are common, particularly due to grade changes.”