Following the successful outcome of a pilot project started in 2018, Boliden plans to spend more than $34 million to expand its haulage trolley-assist system at the Aitik mine in Sweden. The company will add another 3 km of trolley line to the existing 700-m pilot section, and expects the investment will reduce greenhouse gas emissions from haulage by 15% over the mine’s life, in addition to enabling electrified trucks to travel much faster in the trolley-assisted zone than conventionally powered trucks.

Based on the frequency of corporate announcements, 2021 might qualify as a watershed year for the mining industry’s expanding focus on decarbonization and sustainability. The pace of change has quickened as shareholder and economic pressures join with industry concerns about maintaining social licenses to operate in today’s social and political climate. Here’s a sample of various efforts mineral producers have recently announced as they consider and adopt policies aimed at reducing mining’s impact on climate and environment while pursuing future productivity increases and viable future green-energy sources.

Among the major gold miners, both Barrick and Newmont — ranked first and second in production in 2020 — announced new decarbonization goals aimed at an ambition to achieve net-zero carbon emissions by 2050. Barrick said its latest target is “to reduce emissions by at least 30% by 2030 against the 2018 baseline of 7.5 million metric tons (mt) CO2e per year, with a defined interim emissions reduction target of 15%. The interim reduction target is based on feasibility projects that have been identified and are being implemented, while maintaining a steady production profile. Ultimately, our vision is net zero GHG emissions by 2050 achieved primarily through GHG reductions and certain offsets for hard to abate emissions.”

Newmont has committed $500 million over five years toward climate change initiatives, with an initial 30% reduction in absolute GHG emissions to be achieved through a shift to renewable energy, fuel switching, fleet electrification, and site energy efficiency improvements at its current assets. This includes evaluations of potential wind-energy projects at its Yanacocha, Tanami and Boddington operations and solar projects at those mines plus Penasquito.

AngloGold Ashanti, the third largest producer, noted in its latest sustainability report that the company had set its first emissions reduction targets in 2008, and its carbon intensity is currently 43% below the 2007 base year, while overall emissions of its portfolio have almost halved over that time. The company said it is currently consulting new climate models as it prepares to set new targets as a precursor to charting a pathway to Net Zero, conducting detailed climate risk assessments and considering an aggressive set of future climate scenarios.

Meanwhile, Bloomberg news service reported that Rio Tinto plans to work with customers to reduce steelmaking carbon intensity by at least 30% from 2030 and aim for carbon-neutral steelmaking by 2050. It’s also targeting zero-carbon aluminum and net-zero emissions from shipping by 2050.

And in May, copper miner Antofagasta plc said it has set new emissions targets as part of its climate change strategy: The company’s first goal is to reduce its direct (Scope 1) and indirect (Scope 2) GHG emissions by 30%, or by 730,000 mt of CO2e by 2025, relative to 2020. Its longer-term target is to achieve carbon neutrality by 2050.

The company pointed out it had begun in 2018 to target reductions to both its Scope 1 and Scope 2 CO2 emissions by 300,000 mt of CO2e by 2022 and achieved this target two years early with emissions reduced by more than 580,000 mt of CO2e by the end of 2020. In July 2020, the Zaldívar mine became the first of the group’s mining operations, and the first in Chile, to use 100% renewable energy and by the end of 2020, 19.4% of the mining division’s energy came from renewable sources. Zaldívar will be followed by Antucoya, Centinela and Los Pelambres, and before the end of 2022, it is expected that the entire division’s electricity consumption will be supplied exclusively from renewable sources.

Bloomberg also reported in late July that several of the biggest platinum miners are advancing plans to build renewable energy plants that will enable them to reduce their carbon footprint and avoid power outages that have disrupted operations in South Africa for more than a decade. 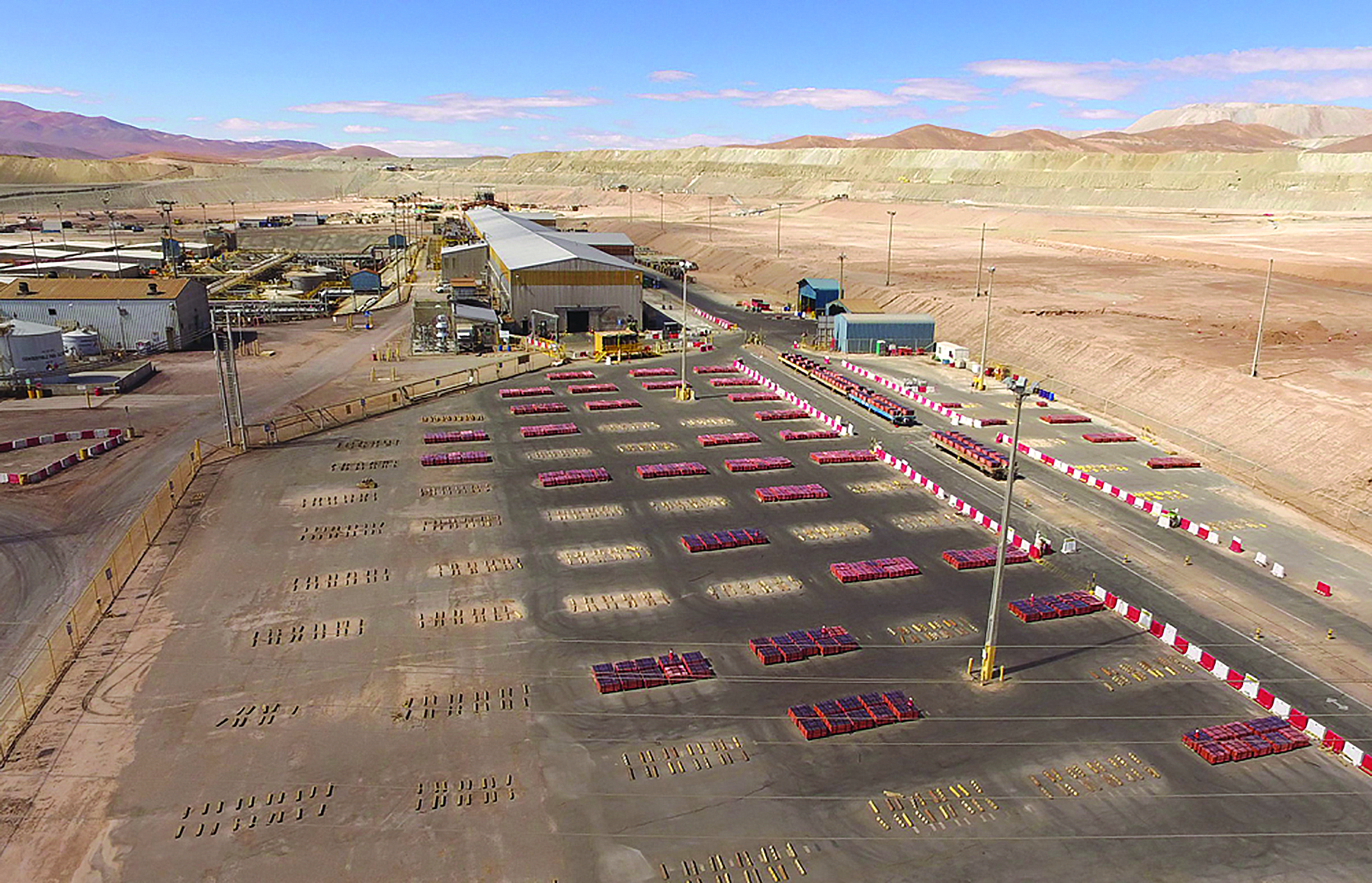 The Zaldivar mine, a 50/50 joint venture copper operation between Antofagasta plc and Barrick, with Antofagasta as the operator, was the first mine in Chile to run with 100% renewable energy sources. Mine officials indicate that the next step will be to employ electric buses and light trucks on site.

Sibanye Stillwater, the No. 1 platinum miner, Impala Platinum Holdings Ltd. and Anglo American Platinum plan to scale up solar and wind farms to reduce their reliance on state-owned utility Eskom, according to the Bloomberg report, which also pointed out that by using more renewables, the platinum producers could ease pressure from investors wary of carbon-intensive industries.

Sibanye approved plans to build a 50-megawatt solar plant to provide power to its gold mines. It’s also evaluating a 175-megawatt (MW) facility at its Rustenburg platinum mines and for additional supplies to come from a 250-MW wind farm. Bloomberg said Anglo Platinum aims to start generating by the end of 2023 about 100 MW of renewable power at Mogalakwena, or about a quarter of the daytime electricity demand of the world’s biggest palladium mine. The company is also mulling the addition of 220 MW of solar capacity for a proposed hydrogen-powered haul-truck project. And, Implats is looking at options to use solar power at all its mines in South Africa and Zimbabwe.

Overall, the scope of recently announced green initiatives covers almost all phases of mining. For example:

Boliden is investing SEK300 million ($34.5 million) in the expansion of electrified haul-truck transport at its Aitik mine in Sweden and Kevitsa mine in Finland. The company initially launched a pilot project in 2018 to electrify haulage at Aitik, during which it installed a 700-m-long electric trolley line and converted four mine trucks to trolley assist, resulting in higher productivity and lower diesel fuel consumption. Aitik, according to Boliden, is currently the only mine in an arctic climate at which an electric trolley line has been installed.

The company plans to install an additional 3 km of electric trolley line at the mine, and 10 trucks will be converted to run on electricity. Overall, said Boliden, the system will be able to reduce greenhouse gas emissions from transportation over the mine’s life span by 15%.

At Kevitsa, 13 mine trucks are being converted to run on electricity concurrently with construction of a 1.8-km electric trolley line. The investment will enable a reduction in greenhouse gas emissions over the life span of the mine by 9%, according to Boliden. 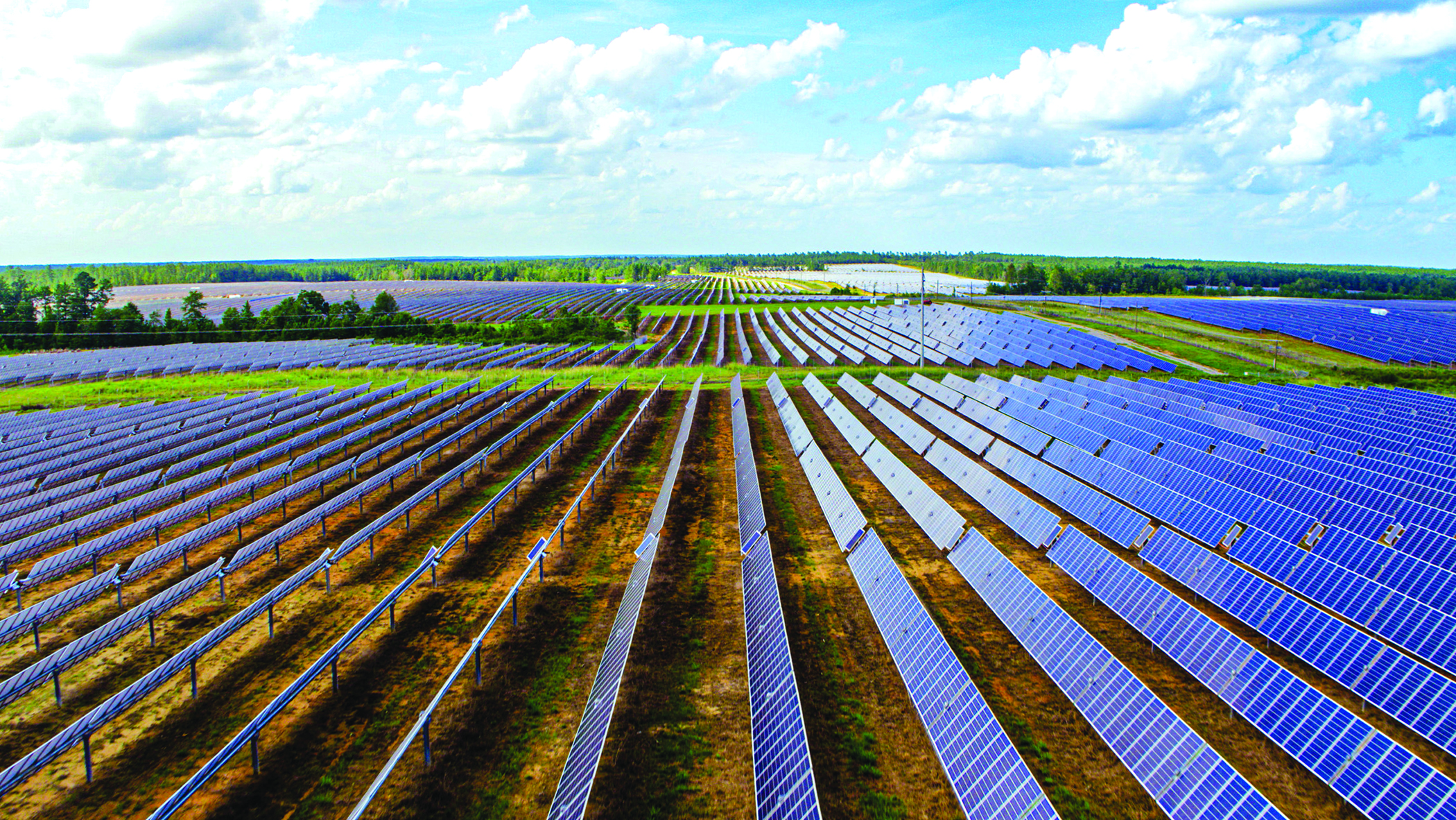 Vale will install a 766-megawatt solar complex, similar to the one shown above, to help power its mining operations in the Jaíba region of Minas Gerais, Brazil.

The systems will be deployed in stages through 2022. Boliden estimated the project will significantly reduce diesel fuel consumption when completed and provide productivity gains, as the electrically powered trucks can run at higher speeds. The work environment for drivers will also be improved. Boliden expects the chief benefits from the Aitik project will be:

• A speed increase from 15 to 30 km/h, enabling trolley-assisted trucks to travel the 700-m stretch 70 seconds faster per trip than conventionally powered trucks.

The pilot project, according to the company, has generated significant international interest. It also is being supported by the Swedish Energy Agency and is being implemented with a number of partners, including ABB and Eitech for the electrical infrastructure and Caterpillar and Pon Equipment for truck conversions.

As part of the project, ABB installed a digital substation at Aitik, which includes a 4.8-MW rectifier connected to the ABB Ability System 800xA control system. This solution, said ABB, was its first-ever application for heavy-duty trucks in the mining industry. The substation incorporated digital communications through fiber optic cables to replace traditional copper cables, significantly reducing costs.

In Brazil, Vale has chosen Nextracker to supply its NX Horizon bifacially optimized smart solar trackers for the Sol de Cerrado solar project in Minas Gerais. The 766-MW solar complex, which will be one of the largest in
Brazil, will help power Vale’s mining operations in the Jaíba area of Minas Gerais and will be interconnected to the regional transmission grid. Initial construction will begin later this year, with the project scheduled for completion in 2022.

The project is expected to play a major role in Vale’s efforts to achieve its corporate sustainability goals. Once operational, the Sol de Cerrado solar project will provide 13% of the company’s total energy needs in Brazil
and offset GHG Protocol Scope 2 emissions by up to 136,407 tons of CO2 annually. Vale said it plans to produce 100% of the energy needed for its Brazilian operations by 2025 and reach carbon neutrality across its global footprint by 2050.

Blackstone Minerals recently provided details on the first of several initiatives being considered as part of the company’s aim to develop a zero-carbon mining operation and downstream processing facility at its flagship Ta Khoa nickel-copper-PGE project in Vietnam.

The company’s current prefeasibility study (PFS) requires the use of oxygen in the downstream processing plant. Typically, the oxygen is produced by a conventional cryogenic oxygen plant with nitrogen as a byproduct. However, Blackstone will investigate producing oxygen via the electrolysis of water, which will produce “green” hydrogen as byproduct by using abundant renewable hydroelectric power and water available at Ta Khoa.

The company provided a list of key points that outline how the green hydrogen concept fits into its strategy:

• Oxygen is required for the POX process and the company believes that water electrolysis with hydrogen as a by-product may be an economic and sustainable option.

• The study will also assess the potential to offset the Down-stream Business Unit (DBU) refinery operating costs through the sale of Green Hydrogen. Should the study yield positive economics, Blackstone will consider including green hydrogen in the Ta Khoa base case and also assess options to commercialize production for sale to third parties.

Anglo American recently reported highly favorable results from the implementation of its Advanced Process Control (APC) program throughout the company. Rohan Davidson, group chief information officer, Anglo American, told analysts the company’s goal is to have all available processes under APC by 2024. “Last year, we reached the half-way mark and the systems that we have put in place contributed over $170 million to underlying earnings. We are on track to double that record next year,” he explained.

“As well as the throughput benefits to drive the financial contribution, APC lets us optimize our energy inputs and our water consumption,” Davidson continued. “Last year, we saved 173,000 GJ of energy, dropping over $5 million from our power bill. Most of this came from our Chilean copper operations where APC controls the grinding mills but [there was] a 7% energy reduction across the entire system. Each time we build one of these controls, we look for opportunities to solve the same problem that exists elsewhere in the group. The copper mill logic is being retrofitted to our PGM operations and the early stages of this project have already reduced our power and consumption there by 4% across the system. In Brazil, a 12-month project to stabilize the temperature and moisture of the feed stock for our nickel smelter has contributed directly an 8-kiloton annual reduction in our CO2 footprint.”

Why High-flow Extinguishers for High-risk Environments?