Gemcom Software International, a supplier of specialized mining productivity solutions, recently announced that it has incorporated a new Human Logistics product into its Gemcom InSite operational performance management product line. The Human Logistics product is based on a solution that has been deployed for almost 10 years, which the company added to its portfolio through the acquisition of Australian-based TeamTech in January 2009.

Gemcom says InSite Human Logistics is an accommodation, travel management and site access product designed to support the administration of geographically distributed fly-in fly-out operations, and personnel movements to and from them. By deploying the solution, Gemcom claims remote operations can lower costs, boost productivity and increase efficiency. They achieve this by maximizing their utilization of flight and camp infrastructure, by eliminating and streamlining clerical and accounting tasks, and by improving access to logistics information worldwide.

The Human Logistics product can be implemented as part of a larger InSite implementation or as a stand-alone solution, and optionally integrated with Enterprise Asset Management (EAM) and Enterprise Resource Planning (ERP) packages such as SAP, Oracle and Ellipse.

“InSite Human Logistics has a proven track record of driving operational cost reductions through the optimization of carrier capacity and clerical automation,” said Simon Stone, product line manager–operational performance, for Gemcom. “We consistently see our clients struggling with these aspects of their operations, and given the compelling benefits we have seen realized in our installed base, I am confident that this new product will change the game going forward.”

In a recent case-history example of the product in use, Gemcom cites the experience of Minara Resources, which operates the Murrin Murrin nickel and cobalt joint venture project in the northern goldfields region between the towns of Leonora and Laverton in Western Australia. The project has over 1,000 staff and contractors, making it one of the largest single-site employers in the region.

With a large staff roster to manage, logistics and accommodation can be complex, costly and time consuming to manage, which led to Murrin Murrin’s deployment of InSite Human Logistics. The information contained in the system is used site-wide by facilities officers, administrators and general staff, creating a transparent process for everyone involved.

“The Human Logistics system ensures we can constantly improve our cost effectiveness on a daily basis by delivering accurate forecasts that require only a minimal amount of administrative work to produce. In addition, the system’s user-friendly reports have streamlined our accounting practices, helping us ensure we meet our logistical requirements and cost projections,” said Robyn Morris, facilities officer at Murrin Murrin Operations.

“By using the software we have been able to make radical improvements to accommodation and travel management, resulting in reduced operating costs. The software enabled us to accomplish this by providing accurate forecasting of accommodation and flights. From this, we determined opportunities to decommission accommodations and reduce aircraft requirements,” she added.

“The system has delivered a real reduction in administration work to manage site-­based personnel accommodation and travel requirements. We had previously employed contractors to manage accommodation utilization, which subsequently required a weekly manual audit to prevent human error. We use the software to its full capacity, resulting in the cessation of contractor support—these procedures are managed in-house with no real impact on other duties,” said Morris.

Marietta, Georgia-based Dos Santos International, in cooperation with M3 Engineering of Tucson, Arizona, was recently awarded the contract for an overland conveyor system at Goldcorp’s Los Filos project. Located in the Nukay mining district of central Guerrero State in southern Mexico, Los Filos is on track to be one of the largest open-pit mines in the country.

At Los Filos, ore from the crushing plant is transported to a valley where it is stacked on engineered pads for heap leaching. A previous system conveyed the ore from the crushing plant to the leach pads via a glory-hole ore pass and an underground conveyor through an adjoining hill to an agglomeration drum before final delivery to the leach pads.

The conveying system experienced material flow problems from the start, especially during heavy rains. The sticky ore tended to plug up the ore pass. Geological instability ultimately collapsed the ore pass, putting the transport system out of service only four months into its operation.

Against this background M3 Engineering was tasked with developing an alternate conveying route quickly, since haulage was being handled by truck and was very expensive. The logical, most direct and economical path was over the same hill (rather than under). This path required a downhill, high-angle conveyor. Accordingly, Dos Santos International was approached about their DSI Sandwich Belt High Angle Conveyor, and was awarded the contract in March 2009 for a downhill system which they dubbed the DSI GPS. (Gently Pressed Sandwich) High Angle Conveyor.

M3 was again tasked with developing an alternate conveying path. This time a conventional conveyor system was developed, following the already developed truck ramps. Dos Santos International again submitted their proposal for the project, now an overland conveyor system. The project was awarded to DSI on May 19, 2009.

An original ten-conveyor-flight system has since been rationalized to only seven flights by consolidating the system with horizontal curves. Additionally, the third conveyor flight has been specially engineered to handle the agglomeration phase by mixing through five intermediate tripped transfers. The enroute agglomeration, conceived by Goldcorp, results in substantial savings by eliminating the need for the additional agglomerating drum.

The overland conveying path is predominantly downhill. While this presents typical controlled starting and stopping problems, it also offers great savings opportunities, according to the company; the downhill flights are strongly regenerative. The drive motors, as generators, will feed back power into the grid which powers other mine equipment. The conveyors will be equipped with variable frequency drives to ensure operations at maximum efficiency. 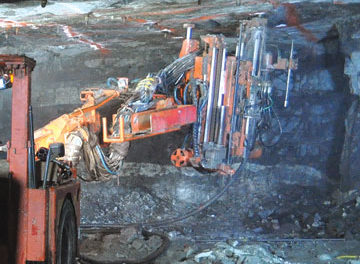 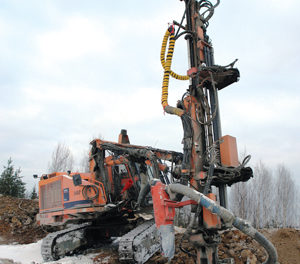