Booyco Electronics, a South African company specializing in electronic safety equipment, has introduced a driver fatigue warning system at various mines in southern Africa and reports it recently received its biggest order to date from a surface coal mine in Mpumalanga. This follows successful trials conducted on the mine’s Cat 777 haul trucks, during which 597 combined driving hours were monitored. Booyco has already started equipping the mine’s haul trucks with the DSS system.

A surface diamond mine in Limpopo also has ordered the system, known as the Driver State Sensor (DSS), after successful demonstration on a Cat 793 haul truck. Booyco’s Charl van den Berg said the mine had been testing other fatigue monitoring equipment, and purchased DSS after it was successfully demonstrated.

Booyco Electronics was appointed sole southern African distributor for the DSS product line in 2009 by Australia-based Seeing Machine. The DSS, originally developed in Australia, is described as a fully automatic driver awareness and fatigue warning system that utilizes a miniature sensor mounted on the dashboard of a vehicle. It provides feedback on fatigue and other factors in order to boost operational safety.

Van den Berg said Booyco has conducted its own field testing and introduced adaptations to suit local conditions. The company said it also received approval from industry unions that have recognized the driver safety implications of the system.

The DSS is also currently being trialed at Vedanta Metals’ Skorpion Zinc mine in Namibia on Cat 777 haul trucks.

“We trialed the DSS over 361 combined driving hours and the system has provided Skorpion with valuable data about the extent and effects of driver fatigue at its operation,” said van den Berg. “Feedback from the safety manager has been very positive. We are also conducting trials at a mine in the Northern Cape on a Mercedes Actros truck, at a mine in KwaZulu-Natal on a Western Star haul truck and at a uranium mine in Namibia on a haul truck.

“We are receiving an ever-increasing number of enquiries about the DSS from the mining industry, but there is also a promising amount of interest from the long haul transport sector,” he said. “Driver fatigue poses not only a serious safety issue, with its associated massive cost implications, but can also lead to damage and loss of valuable vehicles and cargo.”

The DSS is customized to suit each unique customer application. It can be configured to provide instant audio feedback to drivers when fatigue events are detected, modulated in such a way that a driver cannot abuse the system.

According to Booyco, unlike other systems the DSS does not require the driver to wear a headpiece or special glasses and is unobtrusive. The system comprises a number of elements, including a dashboard-mounted sensor, which “sees” the driver’s face and measures eyelid closure and the orientation of the driver’s head and upper torso.

“Eyelid closure information is processed to determine the level of driver fatigue, while tracking head movement makes it possible to monitor driver distraction. If the driver has not been focused on the roadway ahead for a period, the DSS-IVS (In Vehicle System) detects this event and generates instant in-cab alarms, including audio alerts and seat vibration feedback,” van den Berg said. “Once installed in the vehicle, the DSS is fully automatic.”

The DSS allows for integration of data into a fleet management system, allowing management to create a fatigue index, not only for individual drivers, but also for specific routes the vehicles may take. In addition, the data can be used to change driver behavior, for instance, through the introduction of more frequent, but shorter, breaks during a given shift.

Van den Berg related that in one case the system helped to identify that the cause of severe driver fatigue in a specific vehicle was attributable to toxic emissions entering the cab. In another case, the fatigue patterns of a specific driver led to the diagnosis of an unrecognized medical problem.

The DSS can be linked to an on-site control room, where operators can monitor driver activity in real time and take measures to address any problem. 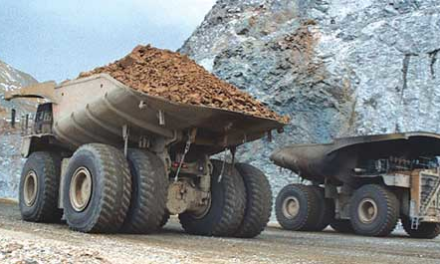 Lightning Risk Mitigation: Going to the Mat for Miners