Located in South Africa’s Limpopo Province not far from the Botswana and Zimbabwe borders, De Beers’ Venetia open-pit diamond mine spans 3 km across and is more than 400 m deep. It is one of the biggest and most productive diamond mines in the world, currently mining about 60 million mt/y of rock to yield 8.2 million carats of diamonds. It also achieves extremely high equipment availabilities.

Since Venetia opened in 1992 the management has employed computer-assisted performance management; for instance, adopting the Wenco truck dispatch and mine planning system early on and later, in 1999–2000, assisting Gemcom in the development of the GEMS asset management program. Today the mine boasts one of the world’s most technologically advanced machine-health monitoring systems, reports Caterpillar, one that has pushed up equipment availability to more than 98%.

A specially built control room overlooks the massive operation. Here, large flat screen monitors show pictograms of all the earthmoving machines currently in use. A color coding system designates the status of each machine: for example, blue pictograms show trucks returning for a load, green signifies fully loaded trucks, and red idle machines. An automatic alarm system flashes problems such as a machine that hasn’t moved for five minutes. “We can see at a glance where each machine is, but we also have two-way communications with the operators so we can, for example, redirect pick-ups where necessary,” said Mike Laboscartni, control room supervisor. “In addition to this real-time monitoring the control room generates valuable data such as tons per machine, per hour and per shift. So it’s also an excellent tool to identify operator training needs.” Venetia was the first diamond mine to achieve ISO 9002 quality management certification.

A total of 47 Caterpillar dump trucks are used to haul excavated rock out of the open-cast mine, and another 45 Cat dozers, loaders, and excavators support the operation. Barloworld, the local Caterpillar dealer, has been able to work extremely closely with mine management to constantly improve machine reliability and drive down the costs per ton. In addition to a tailor-made MARC (Maintenance And Repair Contract), Barloworld has stationed an 87-member team of site managers, supervisors and support staff at the mine to help maintain the equipment. This team meets with De Beers staff daily to discuss and plan machine and operator optimization.

Overall, the Barloworld support for the Venetian diamond mine has four main components:

These systems, according to Cat, comprise a highly advanced machine-health monitoring system. For example, the MVRS alone reports an average of 23,000 machine-health events each month, which are prioritized by Barloworld’s data center.

“In addition to the advanced monitoring systems we also constantly implement new programs, some of which we pilot ourselves,” said Stevens. “For example, we recently introduced a ‘Kidney Looping System’ that cleans and filters the hydraulic oil on board a machine. This is primarily to save on oil and extend machine component life by reducing the number of oil changes and contamination entry points. It also filters out any debris that in time would cause permanent component failure. In some cases we found that filtered oil used through 4,000 hours was surprisingly cleaner than brand new oil.

“We financed and ran the pilot system ourselves before sharing the results with De Beers. They were so impressed that they invested €100,000 in more Kidney Looping Systems. These now also significantly contribute to prolonging component life as well as saving huge quantities of oil – up to 41,000 liters were saved in the first eight months.”

Another result from this problem-solving partnership is the increased life-times of the tires used on the Cat earthmoving machines. “Three years ago we were getting an average of just two and a half thousand hours of service from our tires,” said Johnny Veloza, operations manager at Venetia. “Barloworld suggested that we install special analytical software in our trucks to monitor the various gradients, torsion stresses and turning radiuses on our access roads. After a comprehensive analysis several stretches of roads were redesigned and the machine operators were given extra training. We now have an average of 6,500 hours of service life from our tires.”

To help convert information to maintenance action and greater operational efficiency Venetia has a state-of-the-art parts depot. Advanced management systems ensure that fast-moving items do not stay on the shelf for more than seven days. Larger parts, such as engines are stored centrally in Johannesburg, from where they are also available to other Barloworld customers across the region.

Cummins Power Generation, a subsidiary of Cummins Inc., reports that reliable power from a natural gas-fired power station has been a key element for Jabiru Metals Ltd. in becoming a low-cost producer of zinc and copper concentrates.

When the cost of diesel fuel began to soar, Jabiru Metals—an emerging Australian base metals company—decided that it had to take advantage of the relatively low cost of natural gas and use gas-powered generator sets for its prime power requirements. “Our research showed that Cummins had a very good reputation in terms of gas generator sets,” said Victoria Twiss, a member of Jabiru Metals’ project management team on the Jaguar project. “We needed to be assured of generator reliability because of the mine’s remote location and the production targets that have to be met.”

The power station comprises four Cummins Power Generation QSV91 natural gas generator sets, each capable of producing 1.75 MW. They were installed at Jabiru’s remote Jaguar Mine, which is located 300 kilometers north of Kalgoorlie in Western Australia.

“The QSV91 generators have excellent load acceptance capabilities,” according to Anthony Mitchell, project and technical manager for Cummins Energy Solutions Business. “The mine loads and mill motors can be rapidly reinstated with minimal generators running. This also provides higher efficiencies as the generator spinning reserve levels are significantly reduced.”

The generator sets are tapped into the 1,380-km Goldfields gas pipeline (via a 30-km lateral) which carries offshore natural gas from Western Australia’s North West Shelf to the Pilbara and Goldfields regions, and also Esperance.

The Jaguar deposit—a virgin discovery in 2002—is a few kilometers from the historic Teutonic Bore mine that was a joint venture between Mount Isa Mines and BP Mining Australia before being closed in 1985 due to declining metal prices and a depleted reserve position.

The delivery of the first Jaguar concentrate to Geraldton port was in July 2007. The underground mine, which has reserves reported at 1.7 million tons, supplies a 700-mt/d concentrator. Revenue from the Jaguar project is mainly from zinc (55%), followed by copper (35%) and silver (10%).

A Cummins Power Generation DMC300 Digital Master Control system is used for load demand management of the complete power station, which includes a QSK60 diesel generator set rated at 1.6 MW. The generator sets are maintained under a contract managed by Cummins Kalgoorlie and Cummins Perth. 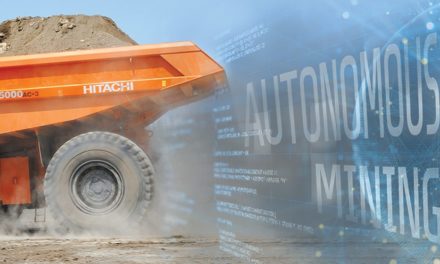 A New Tack for Technical Audits?