Rough diamond prices will remain under pressure over the next 12-18 months. Prices dropped by about 18% during the first 11 months of 2015 due to slowing sales of diamond jewelry, according to Moody’s Investors Service. This latest drop in prices, which would be 28% below the 2014 peak, may be insufficient to revive demand, and the analysts said producers may have to cut costs (reduce prices) even more in 2016.

Diamond mines are concentrated in four countries: South Africa, Russia, Australia and Canada. Miners in these regions benefit from U.S. dollar-denominated pricing. Increasing production costs have, however, eaten into profit margins. Three companies, De Beers (South Africa), Alrosa (Russia) and Rio Tinto (Australia), supplied 64% of the world’s rough-cut diamonds. Alrosa is the largest by volume and De Beers is the largest by value.

Unlike other commodities, which have multiple sources of demand, the diamond industry relies almost entirely on consumers’ appetite for diamond jewelry. About 42% of global demand for polished diamonds comes from the U.S. and 16% from China, a sign of wealth and jewelry-buying traditions. U.S. consumer spending growth slowed to 3.2% from 3.6% and this is likely to weigh on future jewelry sales, where growth already slowed in 2015. China’s growth also slowed in 2015 to 6.9%.

Growth in the global diamond jewelry market slowed to 3% in 2014 from 12% in 2012 and Alrosa estimated that the market is likely to contract by 0.5% in 2015. Although diamond jewelry sales in the U.S. were robust during the first nine months of 2015, sales in China are falling, due to sagging sales in Hong Kong.

While exports of polished diamonds from India in the first half of 2015 decreased by 4% to $11.1 billion, imports of unprocessed rough diamonds fell dramatically by 18% to $7.6 billion over the same period. The Moody’s analysts believe there is an oversupply of rough stones and/or prices are too high for buyers. Although inventory levels are not reported, anecdotal evidence suggests there is also overstocking of polished diamonds, which means rough diamond producers may have to cut prices further to revive purchasing activity. In the meantime, some diamond mines will likely close while others will deplete resources. A lack of new discoveries means that global production will not start to decline until 2023, which should support the pricing power of rough diamond producers.

Moody’s report, Metals & Mining—Global: Diamond Miners May Have to Cut Prices Further to Revive Demand, is available on www.moodys.com. 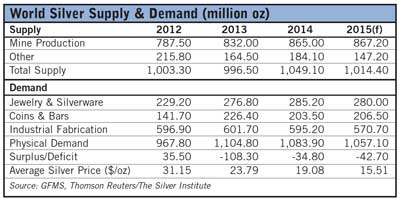 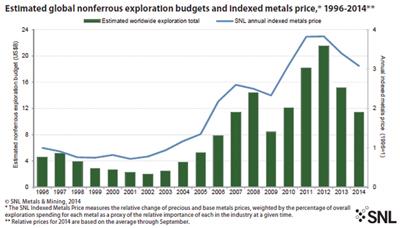 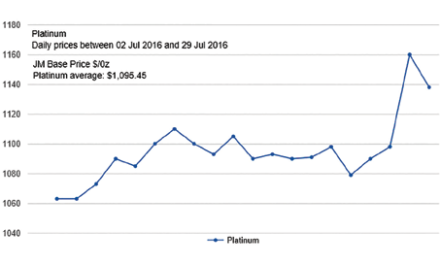