The deficit in the platinum market is forecast to increase in 2013 to 605,000 oz, from 340,000 oz in 2012, according to Johnson Matthey in Platinum 2013 Interim Review. Supplies of platinum will rise by 1.6% to 5.74 million oz, with higher output from Zimbabwe accounting for most of the gains. Strong offtake by industrial users and investors will lift gross platinum demand by 4.9% to 8.42 million oz. Recycling of platinum will grow slightly to 2.08 million oz. 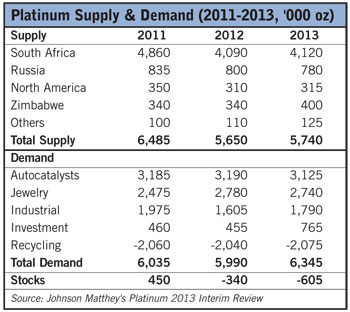 Platinum supplies from South Africa are forecast to rise by less than 1% to reach 4.12 million oz in 2013. Production losses due to one‐off factors such as strikes and safety stoppages totaled around 100,000 oz in the first half. Further strikes or stoppages in the final quarter of 2013 could eliminate any increase in South African supplies.

Autocatalyst demand will fall by 2% to 3.13 million oz, reflecting weakness in the world’s two largest markets for diesel cars, Europe and India. There will also be some additional “thrifting” by those auto makers still using platinum in gasoline catalysts. However, the use of platinum in heavy-duty applications will rise, with a greater number of diesel trucks meeting strict Euro VI limits.

Gross demand for platinum in jewelry will slip by 1.4% to 2.74 million oz. Purchases by Chinese jewelry makers will ease slightly this year after a very strong 2012, but higher demand is expected in Europe, North America and India. Unprecedented offtake by ETF investors in the new Absa fund in South Africa is expected to lift investment demand by 68% to a record 765,000 oz.

Industrial demand will rise by 11.5% to 1.79 million oz. The construction of new production facilities in Asia and the Middle East is expected to boost purchases of platinum catalysts by the chemical sector. A recovery of demand for platinum in the manufacture of glass and computer hard disks will be partly offset by lower purchases by the petroleum industry.

Primary platinum supplies are unlikely to grow significantly in 2014. Industrial offtake will remain strong, purchasing by auto makers should be boosted by new diesel emissions limits in Europe and the outlook for jewelry demand is robust. Even with a further rise in recoveries of platinum from spent autocatalysts, and a drop in investment offtake compared to 2013’s exceptional total, a third consecutive year of deficit is likely.

Recent trends in palladium supply and demand look set to continue into 2014. Primary supply will fall in the absence of Russian stock sales, but this will be offset by additional recycling. Higher auto demand will be balanced by lower jewelry purchases and further substitution in industrial applications. This leaves investment as the wild card in the overall supply‐demand picture.

Lead Market to Remain in Deficit