Iron ore prices were approaching $100 per dry metric ton (dmt) after Vale was forced to suspend operations as more of its miners contracted COVID-19. A Brazilian court issued an order to halt mining at the Itabira complex after nearly 200 miners reportedly tested positive. The E&MJ Price Index (below) shows iron ore prices increased $15.48/dmt during May to $97.98/dmt.

Vale said it suspended activities at the Itabira mining complex, which includes the Conceição, Cauê and Periquito mines, to comply with a decision issued by the Regional Labor Court of the 3rd Region of Minas Gerais. The company said the ruling will remain in effect until it receives a judgment on the merits of the action or until the implementation of control measures to protect miners from COVID-19 satisfies labor inspectors, under a possible daily penalty of R$500,000 ($100,000).

With most of its population residing in urban centers, the number of COVID-19 cases in Brazil is now reportedly second only to the U.S. This is the latest in a string of supply disruptions for Vale, following the Brumadinho tailings dam failure during January 2019. Analysts believe iron ore prices could sustain the $100/dmt for the next two months.

With the world’s economy recovering from the COVID-19 lockdown, this is an inopportune situation for Vale. Chinese demand for iron ore is growing with many of the steel mills looking to replenish stockpiles.

In April, Vale reduced its annual production guidance 15 million mt to between 310 million mt and 330 million mt. Production losses due to COVID-19 were part of that equation and the company said it does not believe it needs to revise its guidance. The Itabira mines supply iron ore to the Tubarao pelletizing complex and most of its production is consumed domestically.

Australian iron ore miners, such as BHP Billiton, Rio Tinto, Fortescue Metals Group and Roy Hill, are expected to capitalize on this short-term situation. Australian exports have grown significantly. Exports from Port Hedland, the country’s largest iron ore exporting facility, were up in May. According to the Pilbara Ports Authority, Port Hedland achieved a monthly throughput of 48.4 million mt, of which 47.8 million mt was iron ore. That figure was a 4% increase from May 2019. 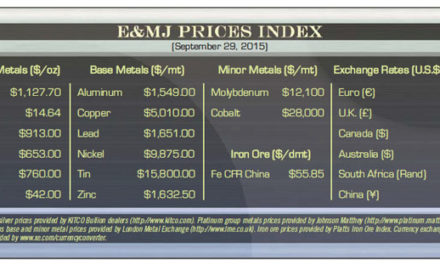