The global copper market is heading for its fifth consecutive year of surplus and price decline in 2016 as demand growth, reined back by China’s continued slowdown, meets with more than ample supply. While the GFMS team at Thomson Reuters expects the forecast surplus this year of 150,000 metric tons (mt) to amount to less than half of last year’s 363,000 mt, this does not herald an imminent return to deficit and a marked upturn in prices. That was the sobering message from Thomson Reuters, which released its GFMS Copper Survey 2016, as copper industry leaders gather in Santiago, Chile, for Copper Week during April. 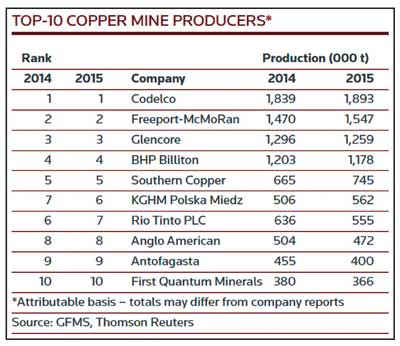 According to GFMS, copper’s recovery will prove a rather lengthy affair, drawn out over a medium-term time frame as the market continues to digest the long line of projects encouraged by the last price boom. In the remainder of 2016, GFMS sees potential for fresh weakness to take out earlier multiyear lows and expect prices to average $4,850/mt ($2.20/lb). While the worst of the downturn will be over by the end of this year, only modest improvement to $5,100/mt ($2.32/lb) is expected in 2017 as a surplus of similar size is seen. In 2018, the supply surplus is forecast to narrow to 60,000 mt and facilitate a low double-digit year-on-year price rise to $5,738/mt ($2.60/lb); still only two-thirds the value of the 2011 annual average peak of $8,821/mt ($4/lb).

Copper mine production is expected to be relatively constrained this year at less than 1%, but even on a cautious view, the GFMS team is still looking for almost 1 million mt of new mine supply to find its way to market through to 2018. The flurry of mine production cutbacks and closures (approaching 700,000 mt), triggered by the sharp drop-off in prices from late last year, has slowed to a trickle for now, insulated by a recovery in prices from January’s near-seven-year low of $4,318/mt ($1.96/lb). As prices look set to head lower again, more curtailments to high-cost capacity seem likely, but not on a sufficient scale to offset the ongoing, albeit slowing build-up elsewhere.

Against this backdrop, global refined output growth is expected to remain subdued, below the average of around 3% seen over the past decade, but this will not be enough to right the market as sluggish global demand growth more than offsets, particularly this year. China’s copper demand, which accounted for around 45% of the total last year, held up better than expected, but will continue to moderate as the transition to a consumer-based economy, hampered by an ailing housing sector, pegs back overall growth. This year, we forecast global demand to rise by 2.3%, above last year’s weak showing of 1.9%, but still well below growth rates either side of 4% seen as recently as 2013-2014.

On a cumulative basis over the past four years, global refined output has exceeded consumption by more than 850,000 mt, with the 150,000 mt surplus forecast for this year expected to take that figure beyond 1 million mt. It is only around the turn of the decade that the potential for a markedly tighter market looms when the impact of new mines and expansions has dissipated, and cuts to capital and exploration spending come home to roost. 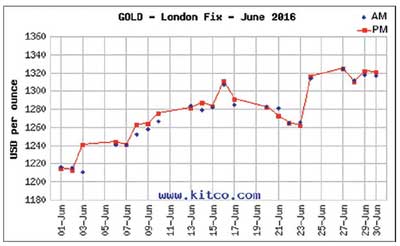