“Difficult market conditions and high-profile mergers and acquisitions (M&A) activity have unsurprisingly impacted budgets the most, as the amount of money being raised by companies dropped sharply from November 2018 through February of this year,” said Mark Ferguson, associate director of metals and mining research at S&P Global Market Intelligence. “We are encouraged, however, by some positive signs, such as the rising number of active companies, and copper recording a year-over-year increase.”

“As the market remains volatile, we anticipate exploration budgets remaining relatively flat in 2020, as any increase to gold budgets will likely be offset by lower allocations to other commodities,” Ferguson added.

M&A activity among major companies has played a critical role in lowering planned spending as exploration budgets by the combined entities are much lower than the collective amounts allocated premerger by the individual companies. The Newmont-Goldcorp and Barrick Gold-Randgold mergers earlier this year are the most notable, as the post-merger Newmont Goldcorp and Barrick Gold have allocated about $48 million and $54 million less, respectively, than the totals budgeted by the pairs of separate companies in 2018.

Gold explorers have lowered their budget by $559 million to $4.29 billion in 2019, the largest decrease for any commodity, while allocations for base metals have increased by $191 million to $3.23 billion. The rise in base metals has been driven primarily by copper, which increased by $245 million to $2.32 billion. Nickel budgets have also increased, by $54 million to $351.6 million, while zinc allocations have fallen by $108 million to $564 million. Allocations to most other commodities have decreased slightly, with the exception of diamonds, which has posted its first increase in six years.

Comparing budgets by the regions hosting targeted projects, Australia’s nonferrous allocations have increased the most, by $199 million to $1.53 billion, surpassing Canada for the first time since 2001. Canada has slid by $134 million to fourth place with $1.31 billion. Latin America remains the top region for exploration despite its $2.62 billion being $117 million less than in 2018. In third place is the “Rest of World” region, which includes Europe and mainland Asia. Allocations to the latter have fallen by $241 million to $1.44 billion in 2019, placing it behind Australia for the first time since 2003. 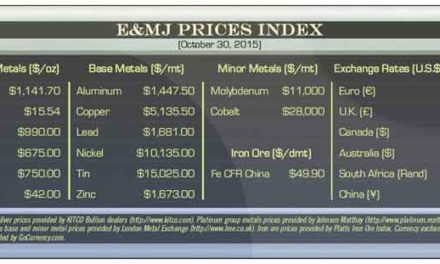