Commodities and the June Swoon

When E&MJ alluded to the fact that the worst might be yet to come for gold in the  May Markets column, it became a self-fulfilling prophecy in June. Hedge funds were liquidating gold holdings in exchange-traded funds in April. Gold sellers managed to claw some back in May before the market was sacked in June.

Believing that the U.S. economy was improving and seeing few signs of inflation, the U.S. Federal Reserve signaled it would consider tightening monetary policies during the week of June 24, which added strength to the U.S. dollar and created turbulence with stock markets and commodity exchanges. The stock market would recover quickly with bargain hunters buying on the dip, but commodities had not as of press time.

In fact, analysts and some serious mining investors were still wondering whether gold prices had reached a technical floor. Appearing on CNBC’s Fast Money, Sprott U.S. Holdings Chairman Rick Rule referred to the recent gold market activity as capitulation selling by investors. Sprott Investments is a Toronto-based capital fund that supports gold mining and exploration. While Rule stayed the course, bullish on gold and gold mining stocks in particular, he admitted that anything can happen when the market enters a period of capitulation selling, and both gold and gold mining companies could lose more value in the short term. Precious metals analysts have made predictions that range from prices as low as $1,000/oz during the third quarter to as high as $1,400/oz by the end of the year. Forecasts with such a widespread variation indicate that no one knows for sure what the future holds.

Aluminum: Caught Between Tariffs and Sanctions 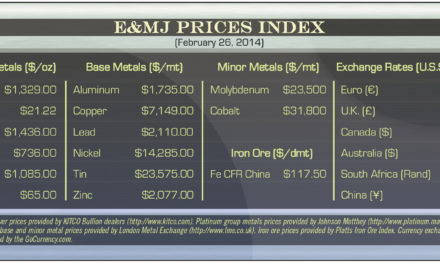