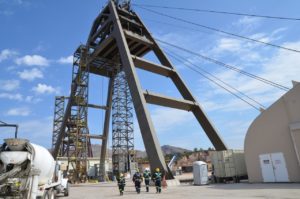 The USDA directs the U.S. Forest Service to withdraw a notice of availability and rescind the final environmental impact statement and draft record of decision that was just issued on January 15 for the Resolution Copper project (above). (Photo: Resolution Copper)

On Monday, March 1, the U.S. Department of Agriculture (USDA) stopped the Resolution Copper Project in Arizona in its tracks. The USDA directed the U.S. Forest Service (SFS) to withdraw a notice of availability and rescind the final environmental impact statement (EIS) and draft record of decision that was just issued on January 15.

Since it released those documents, the agency said it has received “significant input” from collaborators, partners and the public. The pre-decisional objection period was also stopped.

The project, owned by Rio Tinto (55%) and BHP (45%), will reuse the historic Magma mine and is proposed on Oak Flat, a site sacred to numerous federally recognized tribes in the southwest. The department said it was taking this step to provide an opportunity for the agency to conduct a thorough review based on significant input received from collaborators, partners and the public since these documents.

The decision also comes on the heels of a presidential memorandum on tribal consultation and strengthening nation to nation relationships. The USDA said additional time was necessary to fully understand concerns raised by tribes and the public and the project’s impacts to these resources and ensure the agency’s compliance with federal law.

The publication of the Final EIS triggered a 60-day window where 2,422 acres of Tonto National Forest, including 760 acres at Oak Flat, must be exchanged with land owned by Rio Tinto PLC and BHP Copper Inc. The land exchange mandate was included in a rider attached to the fiscal year 2015 National Defense Authorization Act. The Resolution Copper mine could not be built without the transfer of Oak Flat from public ownership where federal laws would prohibit its destruction into private ownership where these laws would not apply.

The USFS said it understood it has limited discretion related to protection of Oak Flat and long-term protection of the site will likely require an act of Congress.

The USFS did not give an anticipated timeline for the review, but said consultations like these typically take several months.

In a company statement, Resolution Copper said it was evaluating the decision. “In the meantime, we will continue to engage in the process determined by the U.S. government and are committed to ongoing consultation with Native American Tribes and local communities,” it said.

Resolution Copper started the permitting process in 2013, with the Forest Service leading a comprehensive, independent review under the National Environmental Policy Act (NEPA), over seven years and multiple administrations.