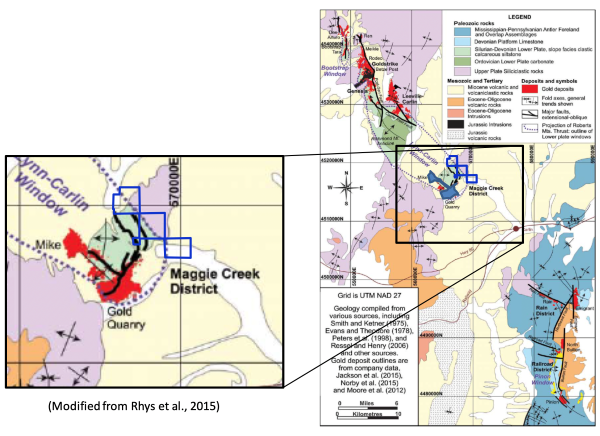 U.S. Gold Corp., a gold exploration and development company based in Cheyenne, Wyo., announced the execution of a transaction related to the Maggie Creek Property among Nevada Gold Mines (NGM), Orogen Royalties Inc., and U.S. Gold. Renaissance Exploration, Inc., a subsidiary of Orogen, and U.S. Gold’s subsidiary, Orevada Metals, Inc., are parties to an exploration earn-in agreement, pursuant to which Orevada, by making certain payments and incurring certain exploration expenditures, had the right to earn at least a 50% interest and up to a 70% interest in the Maggie Creek Property, owned by RenEx, in Eureka County, Nevada.

U.S. Gold through Orevada has assigned its interest in the Maggie Creek earn-in to NGM for a cash consideration of $2.75 million, and NGM agreed that if it exercises the NGM option and acquires the Maggie Creek Property, it will grant to U.S. Gold a 0.5% net smelter returns (NSR) royalty on all gold and other recovered and saleable minerals from the Maggie Creek, pursuant to a separate royalty agreement between NGM and U.S. Gold, the terms of which have been fully agreed as part of the transaction.

“While we have spent the last two years with a laser focus on moving our CK Gold Project along the path to development, we have not lost sight of the excellent exploration portfolio the company holds,” George Bee, President and CEO of U.S. Gold said. “In 2021, we drilled two holes at the south end of our Maggie Creek exploration project. While we knew that we had potential along the entire length of the claims, we followed the reasoning of our then Chief Geologist, Ken Coleman, that the geologic horizon hosting the large gold endowment was a stone’s throw away at NGM’s Gold Quarry mine and might be within reach on the Maggie Creek Project. Previously, the consensus was that structures along the Carlin Trend had put important gold-bearing host horizons beyond reasonable reach. The holes drilled by U.S. Gold intersected the Popovich Formation, the primary host of Carlin-style gold mineralization and returned anomalous gold and significant elemental anomalies known to be associated with the most enriched gold deposits in the area. We believe all that remains is to vector into what could be significant occurrences of gold mineralization, judging the extent of the alteration and pathfinder elements, through further exploration.”

Bee said U.S. Gold believes that pursuing deeper high-grade mineralization is best conducted by NGM, which has decades of experience on the Carlin Trend and understands the gold occurrences in the target horizons.