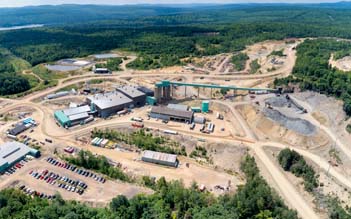 Trevali Mining Corp. has received an Initial Order for creditor protection from the British Columbia Supreme Court under Canada’s Companies Creditors Arrangement Act (CCAA). After careful consideration of its cash position, scheduled debt payments, forecast revenue and expenses, the company’s board of directors said it filed for creditor protection under the CCAA on August 19, 2022.

The court appointed FTI Consulting Canada Inc. to monitor Trevali as it operates throughout the CCAA proceedings. The company placed its Caribou mine in New Brunswick on care and maintenance and it intends to fund itself during the CCAA proceedings through cash on hand and cash flow generated from the Rosh Pinah mine. The company’s Perkoa zinc mine in Burkina Faso, where eight miners perished after an inundation in late April, remains closed. Officials there recently detained a Trevali manager and a manager from Byrnecut, a contract miner working at the operation.

“The decision to suspend operations is a difficult but necessary step to address challenges at the Caribou mine,” said Trevali President and CEO Ricus Grimbeek. “This was not an action taken lightly and we are aware of the uncertainty created and impacts this decision has on the community and on our team.” The company had previously reported operational performance issues due to low productivity rates and equipment and operator availability from the mining contractor. While mining and milling activities at Caribou have been wound down, activities related to environmental compliance and general maintenance will continue. The company gave no timeline for a potential restart of operations.

Trevali confirmed that the two managers were being detained by authorities near the Perkoa mine site, pending a trial on charges related to the inundation. Charges have also been filed against Nantou Mining SA, Trevali’s 90%-owned subsidiary that operates the Perkoa mine. The company is working with its legal representative to secure their release.