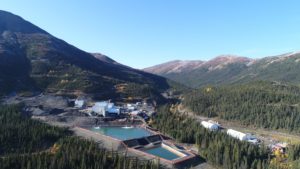 The agreement provides a framework for a mutually beneficial, long-term relationship between the Tahltan Nation and Coeur Silvertip. (Photo: Coeur Mining)

The Tahltan Nation and Coeur Silvertip Holdings Ltd., a wholly-owned subsidiary of Coeur Mining Inc., signed a comprehensive impact-benefit agreement related to the company’s Silvertip silver-zinc-lead mine located in northern British Columbia. The agreement provides a framework for a mutually beneficial, long-term relationship between the Tahltan Nation and Coeur Silvertip, and supports Coeur’s commitment to socially and environmentally responsible mining, according to the company.

President of the Tahltan Central Government Chad Norman Day said the nation would work with the company to fully implement the agreement immediately. “We have a shared vision of empowering Tahltan workers, entrepreneurs and companies while working together to mitigate the mine’s impacts to our Tahltan Territory, culture and values,” he said.

The agreement lays the foundation for a strong partnership and shared benefits between Coeur Silvertip and the Tahltan Nation by aligning interests across several measures of success at Silvertip, including environmental protection, employment and economic opportunities for surrounding First Nations communities and financial returns, among others, according to Chief Marie Quock, Iskut Band Council.

This agreement is also step toward a potential restart and expansion of operating activities at Silvertip, according to the company.

Polyus Will Offer Vaccinations to Miners

FLSmidth Will Supply Processing Equipment to Serbian Copper Mine