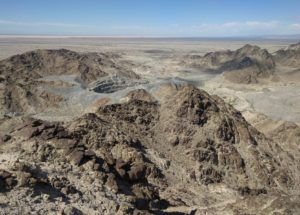 Southern Empire Resources Corp. has completed initial surveying, including a LiDAR survey, of the historical Cross mine underground workings at its Oro Cruz Gold project, located in Imperial County, California. At Oro Cruz, about 3 kilometers (km) of existing underground workings at the Cross mine accessed high-grade, oxide gold mineralization. This zone is a key target of future exploration plans, according to the company.

Southern Empire’s underground LiDAR and survey contractors, EROCK Associates LLC and Dundas Geomatics Inc. (both of Grass Valley, CA) were assisted by American Mine Services Inc. to complete this underground work in an efficient and timely manner.

The Cross Mine underground ramp and sublevel developments, which extend approximately 155 meters vertically below the mine portal, were established in the mid-1990s by the American Girl Mining Joint Venture (AGMJV). Subsequent gold production from the underground mine was limited, cut short when operations ceased on November 1, 1996, because of declining gold prices.