Roy Hill to Become the World’s Largest Autonomous Mine 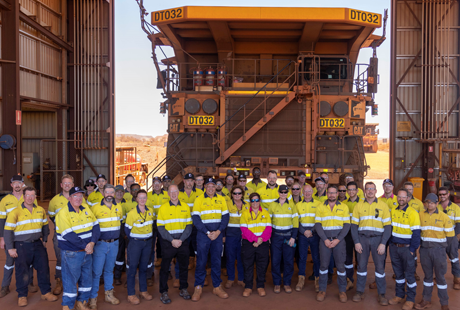 Roy Hill will expand its autonomous haulage system (AHS) from March 2023, converting its mixed fleet of 96 conventional haul trucks to driverless operation and creating the world’s largest autonomous mine. Roy Hill is a large, open-pit iron ore mine that operates in Western Australia’s Pilbara.

Three years ago Gina Rinehart, executive chair for Roy Hill [and majority owner of Hancock Prospecting] together with Roy Hill’s executive team, met with autonomous operators and chose to work with ASI Mining and Epiroc.

The AHS fleet is meeting the desired safety and productivity metrics and achieving higher productivity rates than the conventional haul truck fleet, which were key objectives of the 2-year development program. Autonomous haul trucks are running 24/7 in a dedicated autonomous operating zone, interacting safely with two excavators and numerous ancillary vehicles at intersections, waste dumps and load areas.

“Roy Hill’s in a strong position to continue its transition to autonomous haulage early this year with our teams on site and at the Remote Operations Centre (ROC) in Perth now skilled in autonomous operations,” said Roy Hill CEO Gerhard Veldsman.

“While this milestone achievement enables Roy Hill to rapidly expand their AHS capacity, it also represents a major signal to the rest of the mining community,” ASI Chief Executive Mel Torrie said. “It signifies that our OEM agnostic Mobius autonomous haulage system has reached a level of performance and maturity that can now provide value to the broader market.”

“The ground-breaking automation work together with Roy Hill and ASI Mining over the past couple of years has been successful and very exciting,” said Epiroc’s President and CEO Helena Hedblom. “The team working on this is doing a fantastic job, and we are now looking forward to collaborating with Roy Hill in ultimately achieving the world’s largest autonomous mine. This will bring significant benefits for both safety and productivity.” Epiroc owns 34% of ASI Mining.