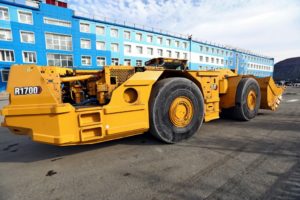 The Oktyabrsky and Komsomolsky mines will receive Cat’s R1700 LHDs (above) with a payload capacity of 15 metric tons.

An equipment buying spree by Russia’s leading nickel producer that began earlier this year continues. Nornickel has purchased 21 pieces of new machinery for its Polar Division’s mining operations, with another 58 machines to be delivered by the end of the year. The total spend for the division will be more than RUB 6 billion ($82.3 million).

The purchased machinery includes drilling rigs, LHDs, trucks and auxiliary equipment. Most of the new machinery (27 units) will go to the Komsomolsky mine followed by the Taimyrsky (18 units), Oktyabrsky (14 units), Skalisty (13 units) and Mayak (7 units) mines. The new equipment is supplied by Epiroc, Caterpillar, Sandvik, Normet and others. In 2020, the division’s mining facilities purchased 79 pieces of machinery worth RUB 2.7 billion ($37 million).

Nornickel said this surge in investment is being made to provide the most advanced equipment for its mines. This year, the Oktyabrsky and Komsomolsky mines will receive Cat’s R1700 LHDs with a payload capacity of 15 metric tons (mt). Compared to its predecessors, which have a great industry track record, this model boasts a higher productivity and up-to-date equipment, the company said. The loader cab is designed using advanced technology. The bucket now has removable bolt-on edge protectors (previously weld-on) and the transmission is equipped with a traction control system.

Northern Star Will Purchase Other Half of KCGM