Mongolia May Pull the Plug on Oyu Tolgoi Plan 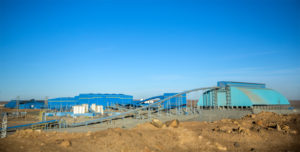 Costs for the Oyu Tologi underground project stand at $6.75 billion, higher than its original estimate of $5.3 billion. (Photo: Oyu Tolgoi)

Issues for the Mongolia’s Oyu Tolgoi copper-gold mine continue to pile up. Turquoise Hill Resources, operator of the mine and subsidiary of Rio Tinto, said the government of Mongolia, which owns a 34% interest in the project, is unhappy with the results of a definitive estimate of the project and significant cost increases, which now stand at $6.75 billion, higher than its original estimate of $5.3 billion.

If the project ends up not being “economically beneficial to the country,” the government has said it may not proceed, according to Turquoise Hill.  It is concerned the development costs of the Oyu Tolgoi project have “eroded the economic benefits it anticipated to receive.”

The government said it plans to initiate discussions regarding the termination and replacement of the underground mine development and financing plan.

In 2019, Rio Tinto announced a 30-month delay in the timeline for the project and a massive cost overrun. In December, it announced an updated timeline with the underground project reaching sustainable production by October 2022.

Turquoise Hill said it is committed to engaging with the government and Rio Tinto to address the issues and revisit the sharing of economic benefits arising from the Oyu Tolgoi project in the context of agreeing on a comprehensive financing plan.

In addition, there is an ongoing tax dispute between Mongolia and Oyu Tolgoi. Oyu Tolgoi said it evaluated the Tax Act claim for approximately US$228 million from the Mongolian Tax Authority (MTA), as announced on December 23, and is seeking a reduction of its carried-forward tax losses by approximately US$1.5 billion.

There is also a class action against the company and certain officers in the Superior Court in the District of Montreal. The claim alleged that the defendants made material misstatements and material omissions with respect to, among other things, the schedule, cost and progress to completion of the development of Oyu Tolgoi. The company believes the complaint is without merit.