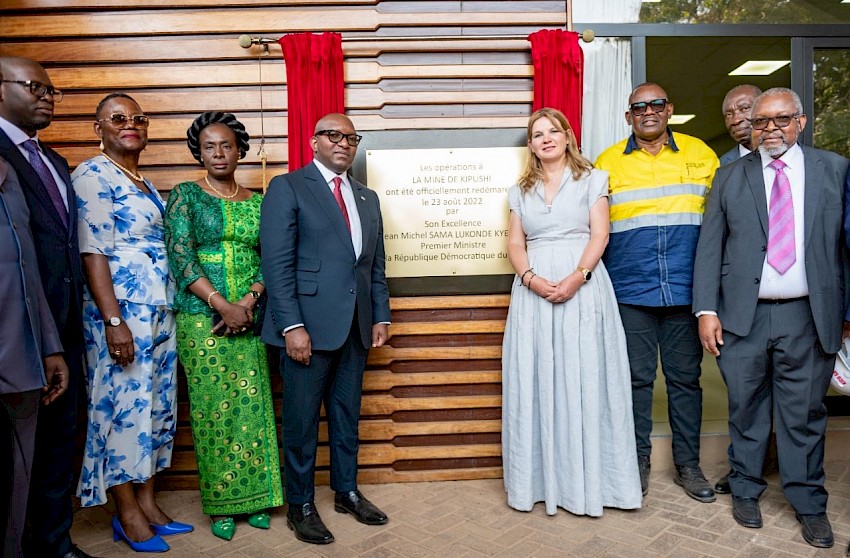 Ivanhoe Mines President Marna Cloete announced that Kipushi Corp. SA (KICO), a joint venture between Ivanhoe and DRC state-owned mining company Gécamines, recently hosted a breaking-ground ceremony to commemorate the start of construction of the processing plant at the historic Kipushi zinc-copper-germanium-silver mine. In addition, Ivanhoe signed a memorandum of understanding (MOU) with the provincial government of Haut-Katanga to study options for upgrading the DRC-Zambia border crossing in Kipushi for commercial imports and exports.

The ceremony follows the outstanding results of the Kipushi 2022 feasibility study, Ivanhoe said, which evaluates the development of an 800,000-metric-ton-per-year (mt/y) concentrator and underground mine, producing on average of 240,000 mt/y of zinc contained in concentrate over a 14-year life of mine. The successful commencement of commercial production would establish Kipushi as the world’s highest-grade major zinc mine, with an average head grade of 36.4% zinc over the first five years of production.

Existing, rehabilitated surface and underground infrastructure allow for significantly lower capital costs than comparable development projects. The estimated pre-production capital cost is $382 million. This infrastructure also allows for a relatively short construction timeline of two years, with the principal development activities being the construction of a conventional concentrator facility and supporting infrastructure, together with the restart of mining activities underground.

Ordering of long-lead equipment is underway and early construction activities have commenced. Financing and offtake discussions, including a pre-payment facility of $250 million, are well advanced with several interested parties.

“Kipushi is exceptional, not only because of the renowned Big Zinc deposit, which is one of the world’s richest orebodies, but more importantly because of the people of Kipushi and the unique partnerships that make today’s ceremony possible,” Cloete said. “We now have our sights clearly set on the re-start of production in 2024. The re-birth of the historic Kipushi Mine will be a great achievement for Ivanhoe Mines, our partners and shareholders, and the Democratic Republic of Congo.”

Before Kipushi was idled in 1993, Gécamines discovered the Big Zinc deposit at a depth of approximately 1,250 m below surface and adjacent to the producing Fault Zone. The Big Zinc The deposit has not been mined.

Since acquiring its interest in the Kipushi mine in 2011, Ivanhoe’s drilling campaigns have upgraded and expanded the mine’s zinc-rich measured and indicated mineral resources by more than double to an estimated 11.78 million mt grading 35.34% zinc, 0.80% copper, 23 grams/mt (g/mt) silver and 64 g/mt germanium, at a 7% zinc cut-off, containing 9.2 billion lb of zinc, 8.7 million ounces of silver and 24.4 million ounces of germanium.

The Kipushi mine, once in operation, will be powered by hydroelectric power and is set to be among one of the world’s lowest Scope 1 and 2 greenhouse gas emitters per mt of zinc metal produced.

Eldorado Gold Will Begin Construction of Decline at Lamaque