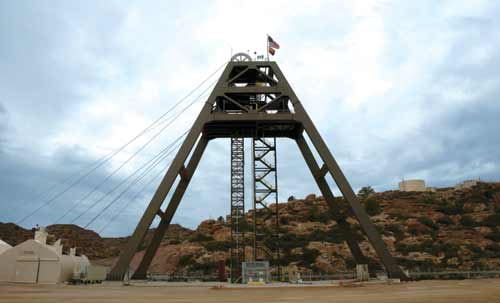 The Resolution Copper project in Superior, Arizona, has entered the next phase of public consultation in its ongoing permitting process, led by the U.S. Forest Service (USFS), with the release of its independent Final Environmental Impact Statement (EIS). The project, owned by Rio Tinto (55%) and BHP (45%), will reuse the historic Magma mine.

“The Final EIS is an important step in the ongoing permitting process, reflecting years of extensive community engagement and rigorous, independent study by the U.S. Forest Service to shape the design plan,” Resolution Copper Project Director Andrew Lye said. “We are still years away from any decision to invest in developing this project, which could eventually supply up to one-quarter of the nation’s copper demand, bringing jobs and lasting economic benefits to Arizona and supporting America’s clean energy future.”

The project is still subject to more permitting processes and a feasibility study that will be conducted over several years.

Resolution Copper said it is committed to continuing its engagement with Native American tribes and working to seek consent before any decision is made, consistent with the International Council on Mining and Metals (ICMM) statement on indigenous peoples and mining.

Resolution Copper started the permitting process in 2013, with the USFS leading a comprehensive, independent review under the National Environmental Policy Act (NEPA), over seven years and multiple administrations.

According to the company, extensive consultation with 11 Native American tribes and local communities guided significant changes to the project, including permanent protection of the culturally significant natural feature of Apache Leap; tribal monitor program focused on cultural heritage protection; partnership to protect and conserve culturally significant Emory Oak groves across Arizona; and economic and community development agreements that can deliver significant long-term benefits for the Superior community.

“Consultation with Native American Tribes and local communities has led to significant changes to the project and shaped an extensive package of initiatives we expect to invest in across the mine’s life, including cultural heritage, education, economic development, environmental mitigation and recreation projects,” Rio Tinto Chief Executive Copper and Diamonds Arnaud Soirat said. “This is a starting point from which we are committed to continue building constructive relationships through ongoing dialogue with Native American tribes.”

The Final EIS is now subject to 45 days of further public review and comment before the USFS issues a final record of decision. After this process, further permitting will progress with other authorities and a detailed feasibility study completed over several years to inform investment considerations on the project. When an investment decision is made, Resolution Copper is expected to take around 10 years building infrastructure to prepare for the commencement of mining, according to the company.

A day before this announcement, the San Carlos Apache Tribe filed a federal lawsuit seeking to stop the USFS from transferring sacred tribal land at Chich’il Bildagoteel, or Oak Flat, to BHP and Rio Tinto for the construction of the Resolution Copper mine.

The lawsuit was filed in U.S. District Court of Arizona. The publication of the Final EIS triggers a 60-day window where 2,422 acres of Tonto National Forest, including 760 acres at Oak Flat, must be exchanged with land owned by Rio Tinto PLC and BHP Copper Inc. Oak Flat is listed on the National Register of Historic Places as a Traditional Cultural Property.

The land exchange mandate was included in a rider attached to the fiscal year 2015 National Defense Authorization Act. The Resolution Copper mine could not be built without the transfer of Oak Flat from public ownership where federal laws would prohibit its destruction into private ownership where these laws would not apply.

“The Trump administration rushed to publish a seriously flawed Final EIS just five days before President Trump leaves office,” San Carlos Apache Tribal Chairman Terry Rambler said. “This callous, immoral and illegal action is being done to enrich wealthy foreign mining interests while knowing that mining will destroy Oak Flat that for many generations has been the heart of Apache religious and cultural practices. We were left with no choice but to file this lawsuit to prevent the transfer of Oak Flat after release of the FEIS.”

The Forest Service informed the tribe that legally required appraisals of the federal and private land to be exchanged were not completed nor subject to public review prior to the publication of the FEIS.

The lawsuit claimed the USFS violated the National Environmental Policy Act by failing to conduct a Supplemental Environmental Impact Statement. The suit stated that the Forest Service ignored significant and technically substantial new information consisting of at least a dozen new studies and reports totaling thousands of pages that are relevant to the environmental impact of Resolution’s proposed mine tailings dump.

The suit also stated that the USFS violated the National Historic Preservation Act by failing to adequately consult with the tribe about ancestral land with great historic, cultural, and religious importance to the tribe and its members.