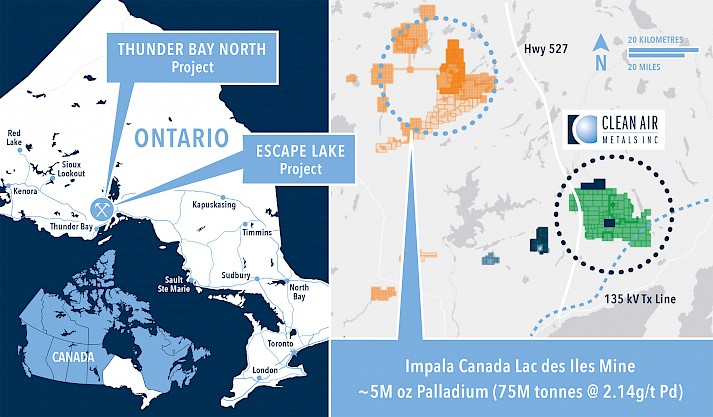 Inferred mineral resources are approximately 410,000 oz palladium equivalent in the Current Lake Deposit and 250,000 oz in the Escape Lake Deposit.

The mineral resource estimate, prepared by Nordmin Engineering Ltd., is based on an underground ramp-access constrained resource model with a cutoff value equating to 1.56 grams per metric ton (g/mt) palladium equivalent using three-year trailing average metal prices for all metals except cobalt, which used a two-year trailing average.

A technical report will be filed on SEDAR within 45 days.

The underground resource at the Current Lake Deposit will be the focus of a Preliminary Economic Assessment, which will include specific work on geotechnical analysis and bench-scale testing on a drilled bulk sample of mineralized material to verify metallurgical recoveries, according to the company.

The indicated mineral resource is developed in multiple zones, which exhibit a variable grade profile with highest grades occurring at relatively shallow depths, including the lower Current Zone and Bridge Zone in the Current Lake Deposit.

The initial mineral resource at Escape Lake is geologically open and will be the target of an extensive systematic drilling program planned for 2021.

According to the company, gold, silver, cobalt and rhodium are potential byproducts in the metal mix at Thunder Bay North Project.

Silvercorp Will Not Match ‘Superior Proposal’ for Guyana Goldfields