Cameco Aims for September Restart for Cigar Lake Mine 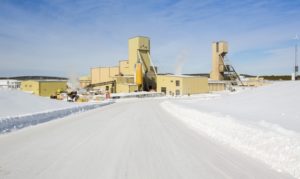 The restart at Cigar Lake mine (above) will take about two weeks. (Photo: Cameco)

Canada-based Cameco plans to restart its Cigar Lake uranium mine in northern Saskatchewan at the beginning of September. Initial production is expected to take about two weeks and the company said it will not be able to make up for lost production during the shutdown. The mine was put on care and maintenance on March 23 due to the threat posed by the coronavirus. If the company is able to restart and maintain production, it is targeting a production of 5.3 million lb for 2020.

The restart at Cigar Lake will depend on the company’s ability to establish safe and stable operating protocols and the availability of the necessary workforce and how the COVID-19 pandemic is affecting northern Saskatchewan, the company said.

Cameco President and CEO Tim Gitzel said the current pandemic has disrupted global uranium production, but the risks to supply are greater than the risk to demand.

“Therefore, we think our plan to restart Cigar Lake at the beginning of September is prudent,” Gitzel said. “While health and safety are the primary considerations for the timing of our Cigar Lake mine restart decision, there were also commercial considerations, including market-related factors and the impact on our cost structure.”

The decision represents an “appropriate balance of the commercial considerations affecting our decision,” he added.

The company has $878 million in cash and short-term investments on its balance sheet and a $1 billion undrawn credit facility, which it does not anticipate it will need to draw on this year.

Gitzel said the company believes risks have been reduced thanks to a unanimous decision by the Federal Court of Appeal in the company’s favor regarding its tax case with the Canada Revenue Agency (CRA) for the tax years 2003, 2005 and 2006. “Based on our belief that the principles in the decision apply to all tax years subsequent to 2006, we expect to recover the $303 million in cash paid and $482 million in letters of credit secured with the CRA in relation to this dispute,” he added.

Rio Tinto Executives Step Down Over Destruction of Heritage Sites